This would be a recommend if it were just a little tighter and you could make out ANY of the action in the movie. An "audiobook" review for dvdsnapshot.com... 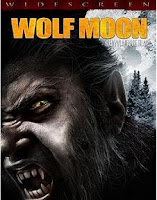 OFFICIAL SYNOPSIS
Amy, a small-town girl, meets and falls in love with Dan, a mysterious drifter. Amy learns that Dan possesses a family curse and the unimaginable horror that was passed on to him by his father, Bender. Dan and Amy's love is put to the test when town locals unite in the ultimate showdown with Bender to eliminate the terror he has brought to their town.

OUR TAKE
The hot, arid planes of the American Southwest are the setting for the slightly Tex-Mex flavored Wolf Moon (much like the recent and execrable desert-set Neowolf ). I'm not sure what makes Werewolves the equivalent of evil Prairie Dogs.

Maria Conchita Alonzo and Chris Mulkey headline here, while Sid Haig, Lin Shaye, and Billy Drago provide their own special brands of B-Movie goodness. All seasoned professionals, they elevate a film so dark in places you can't tell who's who or how they're eviscerating one another. Alonzo plays a feminine, tank-topped Sheriff perfect for her Nevada town populated by teens dumb enough to take rides with strangers. That is until it's beset by a duo of Werewolves who need a family therapist.

Said dumb teen Amy (Ginny Weirick) falls for Dan (Chris Diveccio and his abs, which should get separate billing (seriously, you'll feel disgusting and go do sit-ups after watching this)) in a vaguely Twilight, semi-Near Dark, and far too-montaged romance thankfully buoyed by the supporting players' appearances. While that happens, Dan's Werewolf  daddy is on his way to make Dan "choose." You've seen this story before, and better-lit at that. Again, this movie is so underlit most scenes are barely discernable. Your faithful reviewer calls "Shenanigans" on this after actually having to turn the brightness up on the TV.

The film seems to have at least five false starts while it gets the film rolling with disparate plotlines. It almost starts to feel like it'll sprawl like one of Stephen King's more bloated novels. When it finally settles around a Romeo and Juliet core, it's a bit of a disappointment. I'd rather see Alonzo and Mulkey play "star-crossed lovers" than the younger characters. In fact, his concerned parent and her beset Sheriff seem a nice flip as the roles would usually be reversed. Shaye's quick appearance also breathes surprising life in the film and reminds why she's always a welcome presence. The pacing is certainly off when you're more than 20 minutes in and are yet to have any idea why you should care about a character getting beaten.  If you can make it through that and what is possibly the most annoying romantic montage you'll ever see 10 minutes later, you'll enjoy this competent-enough trek through frequently-trod desert. This is kind of a highbrow take on a SyFy Creature Feature potboiler with both a sunburned spin and a severe case of Night Blindness.

SPECIAL FEATURES
Wolf Moon is presented in Widescreen format and in English 5.1 Dolby Digital and Subtitles in English and Spanish. Along with a commentary track with actor Max Ryan and Co-Writer/Director Dana Mennie, trailers for To Paris, With Love, Neowolf, Sixgun,  Small Town Saturday Night, Circle of Pain, and Daybreakers are included.

CONCLUSION
Overlong by a good 40 minutes and with enough false starts they should've gone and aimed more for "Cable TV Mini-Series" status, Wolf Moon offers an A-list cast of B-movie stars in a not-often-enough-used Nevada setting to make for a trip through VERY well-trod Werewolf-flick grounds. As a movie, it's so dark it makes for a decent audiobook, but it's an ok enough take on the genre if you like monster movies, but a long slog if you don't, We'll split that difference with a grade of...