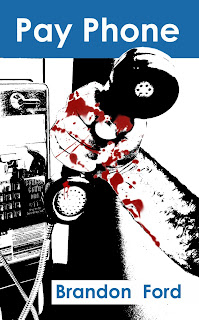 PAY PHONE is Brandon Ford's third novel and an impressive achievement. Set in New York City in January 1998, it's somewhat "timeless," as the imagery and events may easily conjure up for you the grimy, dangerous concrete streets of Times Square at it's 1970s and early 80s sleaziest.

The novel features two isolated characters at it's core. Jake, a monster hiding in plain sight who uses a pay phone to entice his victims, and Chelsea, a vulnerable and optimistic young woman who gets ensnared by him without even realizing the door she's opened by answering a random ringing phone. Tight and tidy, this is spare storytelling. A 2 day timeline is pared to the essentials and the pacing is compulsive. Like evesdropping on an interesting stranger who's "in extremis" in real life, you simply HAVE to follow and find out what happens, even when you dread to look.

Ford draws each character in the small assortment of players as humanely recognizable. Their idiosyncrasies and oddly unifying loneliness make the surprises of backstory and the explosions of cleanly, smoothly-detailed violence as shocking as the nasty surprises of real life. His descriptions of violent acts define "chilling." They're images that stay vivid in the mind's eye. I can't remember the last novel that actually made me gasp out loud -- and more than once, at that -- much less one that actually had me feeling powerless to intercede on a fictitious someone's behalf.

Ford's previous novels CRYSTAL BAY and SPLATTERED BEAUTY demonstrated his eye for detail, which continues to engage here. Those novels and this one also brim with his vivid and memorable supporting characters who add layers of dimension and terrific red herrings. Ford generously engages us with all his characters, good and evil. His skill grows with every outing and you want to start following him now, as PAY PHONE is a surprisingly moving novel staking out his way forward. It's horrors lie in our mundane reality and that's more than good writing. The inevitability of events in PAY PHONE make it almost downright dangerous.

There's nothing fantastical here, but this novel harbors a monster, the one who may be next door. You won't be able to stop reading. I can't recommend it highly enough.
In the end, using a phone connection between villain and victim is even more timely and ominous now in our cell-phone and internet age of virtual interactions... I look forward to the next novel.
Posted by Jay at 11:24 PM