Watch Out For "Watch This"

A timely piece I wrote for my favorite local blog, cgyp.net, about some of my favorite movies, favorite places, and favorite Cincinnatians!

I'm looking very forward to going to a screening of Tootsie tonight at 7PM.


"Now, where," you might ask, "are they screening Tootsie? And why?" 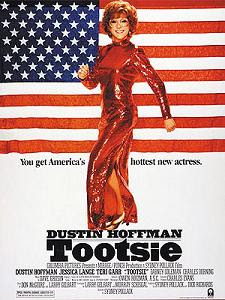 It's pretty fun to be struck by an idea. Sometimes, someone's moment of inspiration goes on to entertain a whole city. Such is the case for Alex Shebar and Allison Johnson. They started a project at the beginning of 2010 to watch all 100 of the American Film Institute's list of Top Films. What started out as a "living room" Labor of Love project with friends has now grown to include the entire city of Cincinnati.

Seemingly unstoppable, the Watch This project has also expanded to include screenings at terrific venues like Take the Cake Cafe (home of the 5/21/10 screening of Tootsie), The 20th Century Theatre (join in on 5/26 for Raiders of the Lost Ark),  Baba Budan's, Grammer's Bar, Virgil's Cafe, and The Cincinnati Athletic Club. They've even arranged to screen King Kong on Fountain Square, and that, my friends, is going to be a blast!

Guess what? I go, and you are invited to join us. After Tootsie, there will still be 61 films on the list to play out through the course of the year. The AFI list includes some of the best Cinema has to offer, including some legendary films considered to be part of the "queer canon" like Rebel Without a Cause, Midnight Cowboy, All About Eve and Some Like It Hot. All these screenings are free and open to the public. This is one of the best kept social nights in Cincinnati, don't miss out.


You can check out the whole list, along with some insightful reviews at the Watch This.


Tootsie is playing at 7PM on 5/21/10 at Take The Cake Cafe, 4035 Hamilton Avenue. At 5PM, Cafe de Wheels will also be there for your burger needs. Who can resist a tasty burger, a delectable cupcake, and one of the funniest movies I've ever seen?
Posted by Jay at 1:00 AM

Email ThisBlogThis!Share to TwitterShare to FacebookShare to Pinterest
Labels: AFI, All About Eve, American Film Institute, Movies, Rebel Without A Cause, Some Like It Hot, Tootsie, Watch This