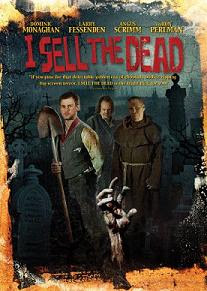 This movie was a pleasure to review for dvdsnapshot.com - You really should seek out this very enjoyable and rather black comedy.

I SELL THE DEAD

OFFICIAL SYNOPSIS:
It was a time of ghouls, ghosts and most ghastly of all, the fine art of grave-robbing. Dominic Monaghan of Lord of the Rings and Lost stars as 19th century corpse-snatcher Arthur Blake, who pilfered the cemeteries and coffins of England until his capture by police. But just before Blake is to meet the hangman's noose, he will confess to a peculiar priest (Ron Perlman of Hellboy and Sons of Anarchy) his gruesome tale of vampires, zombies and cadaver-dealing that takes him from the savagery of the criminal underworld to the terrors of the undead. Producer Larry Fessenden (Wendigo, The Last Winter) and Angus Scrimm (Phantasm) co-star in this deliriously grisly and hilarious homage to foggy graveyards, bloody mayhem and the golden age of gothic horror.

OUR TAKE:
Arthur Blake and Willie Grimes are a pair of grave-robbers in the best "Burke & Hare" tradition. As the film opens, with some colorful credits and a delightfully playful musical score, Willie's losing his head and Blake is giving his final statement to a priest. What's in his story, however, proves 19th century crime to be a rather... supernatural past-time.

Aesthetically, I Sell the Dead is a mash-up of the best features of Hammer Horrors and old EC comics with the same black-humored heart. They say "life is nasty, brutish, and short" but in this world, it doesn't end peacefully or finally. As they steal bodies for Dr. Quint (Scrimm, who looks to have one heck of a "Scrooge" in him judging by this performance), their misadventures move from corpse-robbing to "the resurrection trade." Something of the zany spirit of The Evil Dead is here in the slapstick humor and daring camera work. Monaghan and Fessenden stay droll in the face of various and sundry creatures of the night. The framing sequence of storytelling knits the various anecdotal encounters together in the best Hammer and Amicus anthology tradition.

The film has a terrific look, with areas of New York standing in for the misty, stage-bound England so familiar from those Hammer films. However, it's more modern in it's very black comedy. There are occasional comic-book panel images, layered montages, and other digital effects. They all stand out, but mostly are there to enhance the thrills. What could be wrong with that? Director Glenn McQuaid is a visual effects and titles designer directing his first feature, an expansion on his short film "The Resurrection Apprentice," which sadly is not included on this disc. That design experience shows in this film, that looks darn rich and stylish for it's lower-budget roots. Funny and a visual pleasure, I have no idea why this hasn't had a bigger profile. I Sell the Dead is not to be missed.


SPECIAL FEATURES:
I Sell the Dead comes on DVD widescreen in English 5.1 Dolby Digital Audio and with English and Spanish subtitles. Special features include two separate commentary tracks (one with Monahan and Fessenden, one with McQuaid), an hour-long making of featurette that's quite exhaustive and a nice and in-depth 13 minute featurette on the special effects. The trailer for the film is included, along with those for Dead Snow, Pontypool, The Escapist, Five Minutes of Heaven, and In The Loop.
The DVD packaging also comes with a comic book adaptation of the film.

CONCLUSION:
In the vein of Hammer's sixties-era gothic films, old EC horror comics, and the humor of Edward Gorey, I Sell the Dead is a small, humorous horror gem. With rich style and black humor, this horror-comedy makes for a good night's viewing. Not rated, and not for the little ones, but if you enjoy droll humor and a little monster make-up, you can't go wrong.

OVERALL PICTURE:
MOVIE: A
EXTRAS: A
Posted by Jay at 6:40 PM