One A Week Reviews #18: Shock Waves

"Sea spits up what it can't keep down."

There's high-concept movies, and then there's Shock Waves. An Elite Squad of Underwater Nazi Zombies.
A 1977 schlock-feast that opens with a teaser regarding a group of never-captured Nazi Stormtroopers, then moves on to a pretty messed up pretty lady who's been adrift for who knows how long on the ocean, namely Brooke Adams, who spends a short period of the film in a teeny bikini so memorable you'll think she wore it exclusively through the whole thing. She's on a cruise with Luke Halpin, of Flipper fame, and a motley crew of unknowns that happens to be skippered by John Carradine. 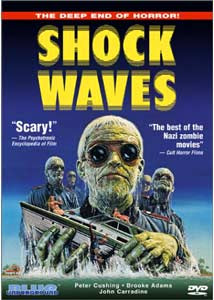 After a disturbing, dreamlike afternoon, they find themselves rammed by a "Ghost Ship" in the middle of the night. As their little ship has suffered major hull damage they have to row out -in the least sea-worthy dinghy imaginable - to the nearest island. They lose their skipper, as bony old Carradine has drowned, and come upon a beautiful, dilapidated old Biltmore Hotel. The hotel is a major find as a location. One scene, where the passengers find an old Gramophone playing is actually and effectively spooky. It's air of decadent indulgence gone to seed serves it's resident well, as this scene also leads to the introduction of big, bad Peter Cushing. As characters start to turn up dead, the others start to investigate and quickly learn their host, Cushing, is a Nazi commander who's been exiled on the island for years. He led a squad of engineered troops who're now the undead, the "todenkorps"(? - my spelling is phonetic and I know barely any German). He sank their boat 30 years prior and now they're back... and their timing sucks.

Ghostly, underwater photography of walking and creepily swimming Nazi Zombies is quite effective. It's almost overpowered by the droning score, but still manages to be genuinely creepy. There's an overall dreamlike feeling to the film. It starts out leisurely and engaging, but eventually just seems damn slow. Sadly, it's slow enough you have time to think about the plot holes. Things like Why do the zombies look so good after being underwater for 30 years and uh, dude, what happened to their boat tend to spring to mind. If you ask the questions, chalk them up to "Dream Logic" as it fits the movie nicely.

That said, if you're in the mood to give yourself over to a story with a leisurely pace, you can do a whole lot worse. Shock Waves is a '70's curio but a pretty good time with great atmosphere... especially when you consider that more that 95% of this flick takes place in the daylight. It's pacing reminded me of Let's Scare Jessica To Death, another love-it-or-hate-it mood piece (one I happen to favor).

In the end, though, this really reminded me of something along the lines of an old eight-page EC Comics moralizing horror story stretched out to 85 minutes. Is it still worth a watch? Yes.
Posted by Jay at 11:05 PM