One A Week Reviews #16: Mutants 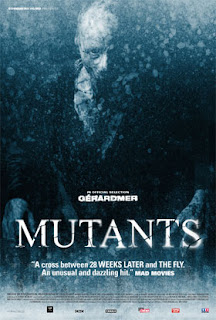 It's always the movies I put off reviewing that turn out to be absolute stunners. I was surprised just how good this one is, and I think you will be, too. Check out my dvdsnapshot.com review. This film is so good I wanted to make it my "Watch of the Week" as well!

OFFICIAL SYNOPSIS:
In a world devastated by a pandemic virus that turns human beings into primitive and bloodthirsty creatures, Marco and Sonia set off to find a secret base to escape from the "mutants." When the latter attack them, Marco is contaminated too. Little by little, he undergoes the same changes. Sonia, who is expecting a baby, is then forced to fight her worst enemy, the man she loves.

OUR TAKE:
From the explosive opening on, Mutants proves to be a well-made, slow-burn new-wave zombie film and character drama from France. A mutant-plague spreading through Europe quickly decimates the population and an outbreak of violence quickly decimates the cast as Marco and Sonia make their way across the snowy mountains to reach a NOAH outpost where they think safety lies. Spiritually, this is kin to 28 Days Later by way of Ken Loach. Director David Morlet, "Morley" for US audiences, accomplishes something stunning here by making the most human zombie movie to come down the pike in ages.

Helene de Fougerolles, pretty much unknown in the US, is a confident, dynamic and emotional center to a very tough story. Her Sonia nurses her slowly declining partner as he starts succumbing to injuries and the mutant plague. As much a drama about caring for a dying loved-one as much as about facing the end of the world, the way she hangs on to hope as Marco slowly declines is almost cruel to the audience. Scenes involving his physical decay and crying frustration are almost too painful and "real" to watch. The middle passage of this film is a cancer drama wrapped in monster-plague dressing. You may not understand why Sonia is immune to the virus, but you emphasize with her as she makes the choices she does. The film so quickly becomes their story that whenever other characters, including "mutants," are introduced, they feel like true trespassers. It's easy to feel tense when everyone is a threat.

A stunning looking film even when the camera work is jittery, the lighting and effects are top-notch.  The icy landscape, I'm assuming the Alps, offers wide vistas as bleak as the concrete bunkers the characters inhabit. When there's gore, it's savage as that in recent French horror hits like High Tension and Inside. The attacking, infected "Zombies" seem to be kin to the ones in the Spanish thriller Rec with explosive speed and pasty deformity. European Horror films of late are filled with the dark and hopeless, but it's bringing true "horror" back to Horror. Mutants is a title that doesn't convey what a heart-breaker this thriller is.

SPECIAL FEATURES:
Mutants is presented in widescreen with English subtitles and the original French dialogue.

CONCLUSION:
A stunning horror-drama from Europe, Mutants can't be recommended to anyone who's nursed and lost a loved one. A bleak, effective, draining thriller that may have you jump more than once.  This is a slow-burn stunner that takes the audience through the emotional wringer, this is easily one of the most humane zombie stories ever made. I expect great things in the future from director David Morley and star Helene de Fougerolles.