One A Week Reviews #15: Pranks (A.K.A. The Dorm That Dripped Blood)

Pranks is our One-A-Week Review this slightly belated time around. An early slasher from 1982, it's a grim staple of 80s Video Store shelves that took on a little infamy by virtue of making the British "Video Nasties" list. The gore and violence aren't that rough by the standards of the day, much less now.

Everything about this movie is a little "also ran." 2 minutes in and it feels cliche. The story involves a group of college kids (most played by actors who look to be on the latter side of thirty) clearing out an old building (75 years old supposedly, but it sure looks like it's only 20) and getting stalked and slashed.

Daphne Zuniga is in this, but briefly. She's the character everyone else knew was planning to leave, so no one misses her when she gets knocked off. Sad, that. The killer knocks her parents off, too, but her mother was definitely pretty obtuse and they didn't seem happy so not a huge loss for the audience there. 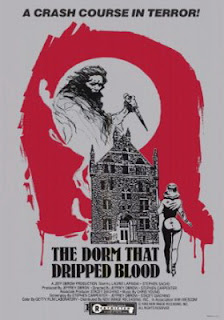 Joanne, the lead college student is awfully mature for her age. Bland, too. That's okay, because most of the other characters don't seem to have either personalities or names. Joanne's main crisis is whether or not to move in with her equally bland and mature boyfriend Tim. It's even less interesting and more about script-padding than it sounds. Men being in love with the less-than-magnetic Joanne is a running theme through the movie and pivotal in the end, but frankly they just seem to be guys who like their lady dull. Things throughout this whole movie are boring, boring, boring.

I totally glazed over for a period of time that felt like forever but was really maybe only ten minutes until there was a drill killing - but even that turned out to be uneventful. You can fast-forward through whole chunks of this film and not miss anything important. Things then drag except for a kitchen murder and a protracted scene of Joanne running from the red-herring crazy guy. That sequence wasn't terrible but the sequence couldn't have been that absorbing for early 80's audiences even before all of this seemed cliche. Things all end in far too much running and exposition. We won't even go into the guy who shows up at the end for no other reason than he's bored with his girlfriend and wants to go sniff around Joanne. The final twist is a bit of a downer, but by then we're not engaged enough to care.

The acting is horrible, even by cheap 80s B-movie standards. The pace is glacial. The musical score is overwrought and filled with too many stabbing violins. Wow this movie also really looks sleazy. Grimy, under-lit, and in transferred from a print good enough to show just how ugly it is. All in all, there's a reason why this took so long to get a DVD release.

Email ThisBlogThis!Share to TwitterShare to FacebookShare to Pinterest
Labels: Daphne Zuniga, One A Week Reviews, Pranks, The Dorm That Dripped Blood, Video Nasties