I kinda take a different approach with this entry in the 31 Flavors of Horror series. A Nightmare on Elm Street is one of those remakes that's been analyzed and parsed to death, and it's not really a flick for me. I'm from the generation who got the Robert Englund series. The new one is for a younger crowd, and it compliments the dark heart of the first one, and is miles away from the morbid humor of the rest of the series.. I meant originally to give it the full rehash, but instead  just wound up with five takeaways. 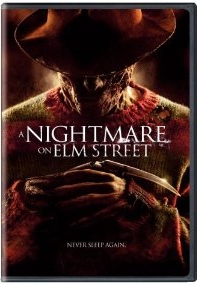 1) Kellan Lutz is really pretty and scruffy, so it's kind of a shame that we know from the outset he's toast. He's the equivalent of the Drew Barrymore kill in the first Scream movie. As his character Dean, was the new squeeze for Kris (Katie Cassidy) - who herself is a stand-in for the Tina character, you have to figure her ex-boyfriend Jesse (Thomas Dekker) is happy his competition's so quickly eliminated. Cassidy seems younger than Amanda Wyss from the first flick, but plays that scared, flustered look just as well. She's also played as much more of a traditional "Final Girl" in the flm's front half than the Nancy character is.

Cassidy also has a great set of lungs on her (both as a screamer and, well...). Oddly, you don't get the impression she and Jesse get it on, unlike the clearly freshly-shtupped Tina in the first film (tacky, but true). The fact that Tina is portrayed as a 15 year old (!) who's having what looks to be decent sex always bothered me. I always thought Tina must've had some horrible home life, since Wyss had a hardness about her, which I guess says more about me being "judgy" than anything in either film.

(Four more points, and my general gripe of displeasure of Jackie Earle Hailey being so damn good, are all ahead!)

2) Rooney Mara is excessively plain and wan for most of this flick. Sometimes she seems downright bored but, in the end, does a good job of portraying accumulated traumas. I'll be interested to see her in the American version of The Girl with the Dragon Tattoo.  (I'm a fan of her sister, Kate Mara, too.) Nancy and Quentin (Kyle Gallner) team-up to face down Freddy, and he replaces Johnny Depp's character in the original. Gallner's visions of what happened to Freddy while Speedo-clad is a fun touch for my readers, too.


3) Some of the best sequences from the original get short-shrift in the remake. The scene of Freddy leaning through the wall paper is just ugly CGI and the "claw in the bathtub" is just a nothing. You have to wonder why they included them at all. The "toss around the room" scene is terrific, but ends on a whimper instead of a scream. The boiler room sequences? They look great, but none of the children in cages are nearly spooky enough... (and don't you hate that? Creepy kids who ain't creepy?) The bit where it's snowing in Nancy's bedroom is quite pretty, but mostly because I was hoping she'd go find Narnia instead of staying in this flick. The best scene in the whole film, though, might be the hallway of blood that gives way to a blossom of it breaking through the ceiling... a gracefully nightmarish note in a mostly pedestrian picture.

4) The film does a better job of explaining the parental conspiracy and their murder of Krueger than the original did. I'm a huge Connie Britton fan, and she's terrifically subtle here, but give me Ronee Blakely's boozed-out and barely-there mom instead. (Also, moms SO know when you've got a boy in your room, and they OPEN that door. They don't just knock.) Britton and Clancy Brown, as Quentin's dad, don't get nearly enough screen time but I'd almost rather have seen this movie from their perspective. The "Sins of the Father," and all that.

5) And then there's Freddy. While Jackie Earle Haley may be the best re-discovered actor in the history of cinema, his method approach to Krueger falls flat. There's very little expressiveness in either his wet gravel voice or the inch-thick pancake-face of make-up he's wearing. In retrospect, who realized how much expressiveness Robert Englund was getting out of simply having a nose?

For viewers of a certain age (ahem), he resembles Jim Carrey's "Fire Marshall Bill" from In Living Color. Come to think of it, Carrey at least would have brought a little humor to the part. Haley acts the hell out of Freddy but the Nightmare movies became popular because Freddy became more "Merry Prankster" than "Pedophile Murderer." Slightly different approach, to say the least. Seriously discomforting is when he licks his "Little Nancy" and tells her she "smells different" - about the only way for most viewers to get through these movies was always to give the "Freddy and the kids" backstory as little examination as possible...  and here it's made very clear he was killed because he was molesting Nancy and the others. Showing us the hidey-hole where Freddy took children doesn't help, either. I guess I'm cross because they had the gall to take ugly and make it uglier.

Between this and Little Children, no one's ever gonna have Haley over to sit their kids. Ever.

Worse, every time he shows up it's with the totally played-out loud noise and "spring-loaded cat"style jump. Dreams have their own logic and lack of rules, but the "mini-nap" conceit used here for jump cuts seems to play more awkwardly than I bet they figured it would. In the end, this is definitely a darker take on the first film, and I don't think you can separate that from the original series. What Freddy became there was almost a figure of humor. This is divorced from that. It's not our Freddy, but it is a more horrifying one. I applaud them for making me downright uncomfortable, but it's also a Freddy so nasty you couldn't possibly want to spend any more  time with him.
Posted by Jay at 10:00 AM