Day 10 of the 31 Flavors of Horror - 1/3rd of the way to Halloween, and we have... yet another sequel. Well, in my defense, I was given a three pack and then, as you'll see soon, I got a bit carried away since. I happen to be a bit of a compulsive when it comes to sequels. If I see one, I feel I should see 'em all. In sequence. So, four Resident Evils last week and now we're on our third Friday the 13th... sensing a trend yet? I am. Don't worry, they won't ALL be sequels... just a fair bunch of them will.

I also like to pretend that watching the movies are like little "dates" I'm going on with my main-machete-man, Jason Voorhees. I adore him so. The strong, silent, rotty type...

Bonus: I stumbled across this terrific blog from 2009 featuring 3D images from the movie. This whole blog is worth checking out. 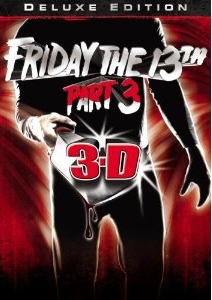 Date number three with Friday the 13th should be the big one. Third dates are traditionally where the fireworks go off, right?

As Part 3 opens, we go straight from Ginny from number 2 to one really annoying local couple. Billowing 3D laundry isn't the most exciting way to start a horror movie, but seeing the low-rent blowsy Sandy Dennis wannabe get it for whining at hubby Harold is worth it. They're really such a cartoonish and awful couple that it's practically a delight to finally watch them die (especially after we have to join him on the john before he does). As they're locals and not related to the camp, one can only assume he kills them because they're awful people.

Then, sadly, you meet Kris, Dana Kimmell, and learn they'd be a much better pair of leads. Kris is a sex negative stiff who immediately mentions something ominous happened to her a long time ago at the lake. Plot exposition also introduces us to the obnoxious jokester Shelly ("would you be yourself, if you looked like this?") the walking fat joke, 4 sex-hungry teens, Kris, and a pair of stoners who could out-toke Cheech and Chong head off to a vacation on Crystal Lake at her family farm.

They run into an old kook who wags an eyeball at the camera, they'd have done better to run him over. Kris puts the big frost on old boyfriend Rick and reminisces to two years ago - the references are all pretty thudding. Rick, the bohunk in the cable-knit sweater, gave up the chance to spend the weekend with one "The Mary Jo Conroy" to hang out with Kris and she says "Boy are you dumb." We all concur. We also keep getting the winch in the barn thrown in our faces - you KNOW that'll show up later.

We run into three black-leather jacket thugs, one a gal channeling her worst Pam Grier. You know they're badass as they just left the set of a Joan Jett or Pat Benetar video. Fat Shelly at least gets his one triumph in life prior to death in getting his own back against a bully. So, dumb teens on the farm, thugs on their way, and one possibly love-struck Jason hiding out in the barn. The thugs plan to burn it down, but Jason makes quick work of them with some handily phallic pitchforks.

Then we take a little break to have Kris' flashback. Her soap opera exposition leads into her memories of running off into the woods and getting ... something... done to her by Jason. He came at her with a knife, but she survived and "blacked out" during their struggle, then wakes up at home. Did she dream it? Did Jason do something untoward to her? Who cares?

All ominous memories, skittish apprehension, and frigid bitchitude, Kimmel is rather universally loathed by Friday fans. She's not awful, she's just not empathetic, which is a crime coming after Adrienne King and Amy Steel. There's such little nuance, you're happy when bad things happen to her. The blurry flashback she has engenders extra annoyance from the audience - that extra layer is more than you should have to deal with in 3D. The fans wind more offended by the possible slur to Jason's character than the idea she may have been violated (and that is what I think they imply, a sort of "Beauty and the Beast" dynamic).

While she's doing that Debbie and Andy go have sex in their hammock. Debbie is played by former Dayton, OH anchorwoman Tracie Savage, fondly remembered from my own adolescence. Andy winds up getting a killed while walking on his hands - the scene that makes the boys cringe. Debbie gets to soap her bosom in the shower and retire back to the boudoir with a magazine before getting knifed through the back - a repeat of the Kevin Bacon kill from the first movie, just a little lower and a little... wider. Spring loaded bodies falling from the sky and flying through windows are other tricks lifted from the earlier movies.

Next, the Hippie goes to smoke a join in the outhouse (must there be so many poop-based scenarios in this flick?) and winds up getting it in the basement. No, not his, that was involved in the scene before. I mean, the basement of the house they're all in. I guess it's punishment for annoying us with the popcorn. At least he went out buzzed. She-hippie doesn't fare any better, with a hot poker to the gut. Totally defined by their joints, they're not even characters.

Meanwhile, the two spare characters, Vera (who doesn't even get a personality, but instead settles for an ugly pink tracksuit that sears the eye.) and the super-needy Shelly are out on the pier. He at least provides the hockey mask that becomes so integral to the rest of the series - it almost seems tossed-off, happening halfway through the movie. She, gets the, renowned harpoon through the eye.

By this point, similar to the structure of the second movie, our central couple comes back to find a house filled with dead people. Rick is quickly dispatched, in maybe the only genuinely creepy scene, being quieted right around the corner from Kris, but it's quickly spoiled when his head is crushed so his eye pops out (predicted by the kook in the beginning perhaps?) This leaves Kris to find the rest of the bodies and stumble her way slowly through the house, mugging for the camera the whole time. She gets more licks in on Jason than she should be able to. It's like he's not even trying. She also has to make even looking for her keys melodrama. There's some slow-paced, but effectively shot stalking. In the end, all the plot points set up - the excess hay, the winch, the rickety bridge and some gasoline - are paid off, and Kris is, admittedly, rather proactive about doing Jason in. If anything it's more attempted murder than self-defense. Kris also gets a last minute save from someone she clearly doesn't deserve. If her helpmate had just hid out a little longer he would have lived to annoy another day.

3D works best emphasizing depth of field but the "hey, let's stick this in your face" bits are fun. On a third date you know something's gonna be flying at your face. Laundry poles aimed at you, TV antennas, a bowl full of fish, a snake gag that does not work. Rats and bats fare a little better.A doobie is passed. The legendary yo-yo trick and popping popcorn annoy just as much now as they must've in first run. So cheesy, as is the eye-pop, though it gives a jump. There's a good deft-of-field example with Fox climbing up a ladder. A harpoon bolt coming at the audience and a falling wall of books get thumbs up as well.The big pitchfork handles pointed at the audience after are some of the worst examples - partially because the 3D print seems so muddy, blurry that the blue and red don't stay in register. There's some juggled fruit that doesn't hold up either.

You start to wonder after a point, "does Jason get anything out of this?" The satisfaction of killing must be enough - there's little rhyme or reason to the victims beyond "they're there" by now. Shelly deserves it for being annoying, but why spare Kris the first go round. Maybe she's just psychic. His physical presence doesn't register much either. He's nonchalant stroll may be the reason people love Kane Hodder from the later pictures so much. He's genius compared to this guy. Hodder understands hulking, while this guy just knows a mid-day saunter. His pressed khakis and work shirt don't fare well either. He stays so clean and tidy. They're also suspiciously well-pressed for a guy who lives in the woods.

Evidently there's another ending where Kris loses her head, literally, that was cut on Kimmel's insistence. She must've had some Polaroids of someone to have such clout. As is, things are flashy and underwhelming. No one explains why people would go out into the middle of a lake in a boat when they're feeling wigged out and all their friends are dead. This is not the best place to hide out. Especially on the now swamp-like Crystal Lake. She gets to hallucinate her Jason, and it seems clear she was in love with him but she annoyed to the point where he chose to try and do her in. Seriously. When she sees him he comes after her like a reunited lover... there's subtext in them thar hills.

They then rehash the end of one with a moldy, soggy Mother popping out of the lake. It would have been better by far to just leave well enough alone with that ending. All in all, it's like good third date buildup, but with an unsatisfying third-act finish (yes, you know exactly what I mean).

Will there be a fourth date?

Of course. Because while the first three were empty and kind of awful, he pays for dinner.
Posted by Jay at 10:00 AM