You don't always need big bucketfuls of gizzards and grue splashing across the screen to make a satisfying horror flick. Sometimes, a few tense chills and moments of sly humor can make a satisfying night in. More odd and stylish than truly spooky, this is a must just for the impressive work by Crispin Glover and some sly, funny moments.

The downside of this is you'll be eyeing all your pets, wondering if they're part of a giant herd, out to take over your home and eat your enemies... and really, aren't those the best kind of pets? 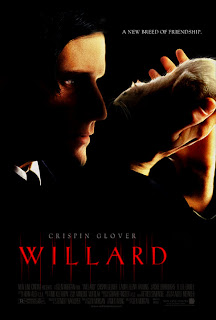 Willard revisits the 70s original about an oddball with influence over rats. Glen Morgan and and James Wong brought style to the X-Files and Final Destination series, and the direct and produce here, respectively. Willard is a good looking movie anchored by a strong performance by Crispin Glover, who's very relateable, even if he is sporting the same look, and possibly even the same suit, he wore in the Charlie's Angels movies.

Willard Stiles is an exquisitely miserable man who lives in a drab, brown home (loomed over by a portrait of Bruce Davison, the original Willard) in a dreary, generic every-city. The broken-down Stiles mansion is filled with dust and overpowered by his domineering, decaying mother (Jackie Burroughs). They have the sort of dynamic where she's overly invested in his bowel movements. She puts him down, needles him, and clearly needs smothering with a pillow. She's not quite so bad as the house's rat infestation... which seems to have no trouble eluding the traps he sets. The only bright-spot is when he decides to make friends with the colony of rats, starting with Socrates. Willard seems capable of communicating with the rats, getting them trained and organized (too bad he can't do that at work). He also forms a kinship with Ben, the biggest and baddest of them all. Willard wants his relationship with Socrates to be primary, but Ben has his own agenda.

(More rat-droppings, and a surprise porn-star cameo, after the break!)

At work, he's dominated by boss Mr. Martin (R. Lee Ermey at his noxious, shouty best) and assistant Mrs. Leach (Ashlyn Gere, staying dressed and oozing disdain in every shot), at Martin-Stiles, a company he's clearly only with because his father built the company. Martin clearly enjoys humiliating Willard, who actually makes it easy for him. He even finds himself demoted to attend to Cathryn (Laura Elena Harring), which brings an actual hope of romance to his life. The rats, however, bring confidence. Soon they're doing his bidding... and then he's doing theirs.

As Willard gets more involved with the rats, it becomes clear they're taking over. Ben becomes more dominant than Willard is comfortable with, and it's clear who's going to wind up the "Alpha Dog" here. I personally chose to read Ben's motivation like an obsessive lover, perhaps scorned, who's going to edge Socrates out and have Willard all to himself. 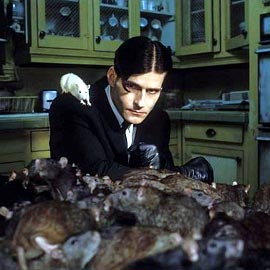 Crispin Glower is a delight, milking every uncomfortable, twitchy close-up. In one scene, where he goes through his father's desk, he's just about heartbreaking. In another, where he finds out just how financially screwed he is, it's an honest and understandable reaction that pretty much puts you on Willard's side no matter what happens. As the lead he also sets an off-putting tone here than makes the black humor work.If you've ever been kicked around and put down, you can't help but feel for Willard. He also sells that a man can get into a one-sided shrieking match with a rat.

Special effects and film-making techniques improved greatly between 1971 and 2003, which means we can have a cascade of rats pouring from elevators and a wonderful reverse "Cat and (many) Mouse" chase set to Michael Jackson's song, "Ben," which was the theme to the Seventies' Willard's sequel. Ermey is great, but toned down to a PG-13, and clearly relishing his one big F-bomb. Harring is surprisingly subdued, and even with little to do, Gere seems to relish her supporting part as "office bitch." Odd to see her in anything when dressed, though.

From truly attractive opening titles, a wonderful visual style, and amusing cast, there's lots of great stuff here, but there's about twenty minutes too much of it and Willard feels more like an episode of Amazing Stories than any sort of horror movie. However, this is definitely a satisfying little revenge flick. There's something about those blank, beady eyes that just disturbs me... the rats' eyes, not Glover's...