31 Flavors of Horror #1: Hershell Gordon Lewis, The Godfather of Gore (One A Week Reviews #39) 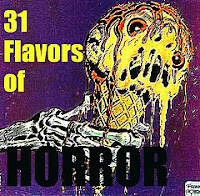 I'm excited to start my 31 FLAVORS OF HORROR series of reviews to celebrate the favorite month of every horror movie fan and blogger, October. I'll be continuing my One A Week Reviews with each Saturday's post, but you can expect a different, tasty fright flick review every day of the month!


I'd like to also say a big "Thank You" to all the marvelous reviewers, bloggers, and podcasters who both inspire and encourage me. Many of you I get to see twice a year at HorrorHound Weekends, and I look forward to the next one!

So let's get started... and what better place to start than with a look at the very beginning of gore? It was a pleasure, and serendipitous timing, to receive a copy of this to review for  dvdsnapshot.com! This is a must-see, highly recommended documentary for any fan of genre cinema!

Official Synopsis:
Take an outrageous ride through the wild world of exploitation films with this often-hilarious documentary, Herschell Gordon Lewis, The Godfather of Gore! 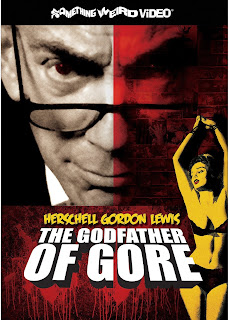 Featuring interviews with cast, crew, and critics such as director John Waters, drive-in movie critic Joe Bob Briggs, and Herschell Gordon Lewis himself, The Godfather of Gore traces Lewis' start in the innocent bare-naked world of “Nudie Cuties” before he shocked the world with Blood Feast, the first-ever gore film! Lewis then continued to assault audiences with such audacious shockers as She-Devils on Wheels, Blast-Off Girls, Just for the Hell of It, Two Thousand Maniacs!, The Gruesome Twosome, The Gore Gore Girls, and the incredible Wizard of Gore!

Experience a decade of motion-picture madness – with tons of clips, rare outtakes, and testimony from the people who were there – as Herschell Gordon Lewis, The Godfather of Gore leaves you laughing and screaming at some of the most amazing movies to ever play American movie theaters!

Our Take:
Blood Feast is a terribly made movie. It's nonsensical, the actors aren't great, the effects are awful, and it's technically inept. However, it was the first gore film, and the stories behind it and it's makers are pretty fascinating. It's the anchor around which Hershell Gordon Lewis, The Godfather of Gore is built. Something Weird video's love letter of a documentary to H.G. Lewis, perhaps the king of B-movie cynicism and creativity – not to mention the father of direct response marketing. He created the gore film, and was one of the kings of biker films and “Nudie Cuties.” These nudist films seem especially like curios, as they mostly consist of nude people walking away from the camera. As a bad photographer who always misses the moment, I can relate.

Here, Lewis reflects on his career and inadvertent contributions to film history. He always approached movie making as a business, not an art, but as a consummate storyteller, he wins you over with his charm and has panache to spare. Taking the time to share all sorts of anecdotes about his films and revisit locations, The Godfather of Gore turns out to be a more expansive documentary than you'd initially imagine. The filmmakers even put together footage from an unfinished film called “An Eye For An Eye” and include it here.

Beyond the interviews with the more well-known John Waters, Joe Bob Briggs, and Frank Henenlotter are the real gems here: chats with outsider arts pioneers Lewis, fetish photographer Bunny Yeager and producer David Friedman. There's also a collection of interviews with his collaborators, many of whom charmingly recall their time on the silver screen. With lots footage from his films and terrific stories, this is a must for fans of independent and genre cinema.

Special Features:
The Godfather of Gore is presented in Widescreen, with Dolby Digital 2.0 English audio, and the source materials look and the best they probably ever have. Included as extras are over an hour of deleted scenes, which further expand on the stories shared in the feature and the short Hot Night at the Go-Go Lounge! It's a curio alright, 10 minutes of music and dancing, to which there seems to be no point to until the shirts come off the go-go dancers. There's also a gallery of advertising art and a collection of trailers to Lewis' movies, each an exploitation masterpiece.

Conclusion:
A nostalgic look at the surprisingly innocent history of breasts and blood in the movies, but probably for genre fans only. Hershell Gordon Lewis, The Godfather of Gore lets an American original tell his story, and his glee is infectious.