I know what you're thinking:

Well, for whatever it's worth, if you're going to watch them - and why not, they're fun - you may as well see 'em all, and see 'em in sequence.


This one adds a couple of pretty boys to the line up of pretty, slender gals who kick zombie butts, and was released in 3D... so there's that... anyhow, I promise I'll split up full-series reviews in the future, mmmkay? 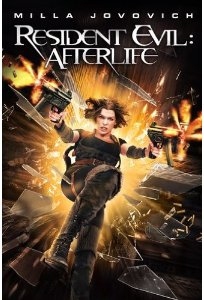 Paul W.S. Anderson returns to bring the style over substance for the 4th Resident Evil. Right from the get go he brings green-glass candy lit city buildings and fashion victims standing in the Tokyo rain.

I'm not sure about the "Four Years Later" title we get as, at one point in movie three it's stated it's been five, but no matter. Not important. No need for logic here considering our story is set in the largest, most impossibly impractical underground Hive yet. It'd be easier to just build it and slip in in sideways under Tokyo than drill this puppy out

Let's get to the important stuff? How's are Alice. This go round she's sleek and sexy, clad in black leather and all Ninja-style. Her balletic, slo-mo slash-fest of an introduction is worth watching twice. This time Alice is also an army of clones. She's her own comic-book style sexy Suicide Squad and it's a pleasure to behold. The CGI is impeccable this go round and bullet-time has thankfully been given enough of a rest that it seems fresh again.

The special effects fest really is gorgeous - an opening that sets up the rules, then breaks them, returning Alice-Prime to her humanity, eliminating much of the Umbrella Corporation, and then taking us to the survivors of Arcadia. White the third film's desert parched look pleased the eye, this installment adds color and the softness of nature in places. It also let's Jovovich play something a little closer to a human being again, though she's still primarily an ass-kicker.

This time, videogame rules require ruby-red robot crabs on one's heaving, bosomy chest. That chest belonging to Claire (Ali Larter), a carry-over character from the last film. As the last two strong-yet-skinny women on Earth, they turn tail and head to San Francisco (not that I'm reading ANYTHING into that). However, they sidetrack when they see signs of life in Los Angeles - mind you I did say "life," not "culture." It's nice to know that only the sexy survive the zombie apocalypse as they pick up Boris Kodjoe and Wentworth Miller. The rest of the cast? Possibly the most disposable crew of extra meat for the grinder yet.


The videogame set-up requirements get them stranded on the roof of a besieged downtown LA prison, with a goal of getting to a large oil tanker off the coast. They'd malinger, but the dead are getting into the prison which gooses 'em a bit. They even play the ol' trope of the heroine stopping to take a shower, though with a bit of a twist. Twist and obstacles follow as it suddenly becomes very imperative to get out of there as soon as possible.

There's a few showpiece sequences here: the opening that resets the story and rules, the plane crash, and just a nice underwater moment that offers tension without a spring-loaded zombie popping up to give a jump. Well, until they do... There's also a sequence with rain and a giant monster of an undead guy with an enormous axe-mallet contraption that seems the obvious highpoint for the 3D exhibiting of this one. I wish I'd seen it in that format, must have been a glory. There's enough slow motion at the end that it probably pads 10 minutes into the film, but it's stylish and enjoyable. Those beloved devil Rottweilers even make an appearance.

There's also a point-and-shoot homage to the video games, I would guess - just lots and lots of onrushing hordes getting mowed down. I'm not sure anyone could survive the adrenaline and excitement of being Alice. Jumping off of buildings, then swinging super high kicks moments later. It's a lot for a gal who hasn't had a spa week in half a decade. By the end though - the last sequence, the last location, the last goal-oriented gaming sequence, you have to wonder just what Umbrella would hope to accomplish. What's the point of ruling a world with no one left in it? As fun as stylish fighting is, there comes a point when no one is left to fight.

In the end, this fourth film is the most good looking of them all. It's another entertaining installment, but it also possesses the most invigorating fight sequences since the first (which you may or may not remember, was some cutting-edge stuff at the time. Running up walls to jump and kick dogs in the face and all that...).

Alice remains a good date for an evening in. If she comes around to grant us a fifth installment, I'll check it out.
Posted by Jay at 10:00 AM