T
The next 2 scoops in the 31 Flavors of Horror series are two personal favorites of mine.


Some of us lucky few who would haunt the weird late-night grindhouse movies they'd show on USA in the Eighties or Nineties got introduced to many wacky, creepy movies. The nauseating, perverse duo of Andy Warhol's Dracula and Andy Warhol's Frankenstein were no exception. Rare, terrifyingly "other," if you were as young as I when you first encountered them, you know they're exotic, awful, freak-fests worthy of a second look. They freaked me out and stayed with me, they may do the same for you.

31 Flavors of Horror #22
Flesh For Frankenstein 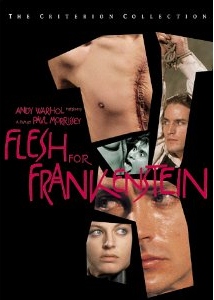 A good deal of the perversity here comes from the duo of Joe Dallesandro and Udo Kier, who exquisitely overacts as the Baron who is lusting after the perfect "nasum" for his experiments in building his specimen of uber-man-meat. His obsession with his master race is all-consuming... and highly comical. You'll savor his German accent as it emphasizes a W in the place of every R and V. (Also: "Pop-o-lates" for "populates." Love it.) Sure, he's building a male and a female, but she's an afterthought. He's got a sister-wife (eww) and a red-headed "Igor" in his assistant, Otto.


Kier's cerebral fey-ness is countered by Dallesandro, who still wasn't much of an actor at this point in his career. He's all meat as a farmhand from the Bronx who has somehow been transplanted to 19th century Serbia. Van Vooren keeps running into him while he's boning Farmer's Daughters. Of course she's going to want him.

(It's all meandering sass, smut, and gore from this point forward...)
The Baron, meanwhile, wants his head because he's so single-mindedly horny. Dallesandro's delivery is pretty awful, be it his "What did they do to you" soliloquy or his slapping Van Vooren with an unaffected "you bitch!" As an actor, he's a good looking face. Admittedly, he's a better actor than hang-dog faced Sacha (Srdjan Zelenovic) , the quiet monk who winds up beheadded for his enormous "nasum" by mistake. (He's somehow stiffer as the silent creature than as a talking bore, but not by much.) Sacha clearly, like everyone else in the movie, wants Dallesandro.
The former hustler was something of a sexual icon in the 60s and 70s, more for looks and presence than any acting ability. (Admittedly, as he got older, his acting improved. A little.) He really is a gorgeous human being. Fans of his look, or just those wanting to see more of the crotch from the "Sticky Fingers" album cover, should seek out Flesh and Trash. One sees every inch of him, much closer and twice over. This outing features one hilarious moment of his full-frontal. It looks like Van Vooren is performing oral sex on him but then it's revealed she's loudly slobbering into his armpit. She over-squeaks in her slobbering like she overacts everywhere else.

This was also shot to be shown in 3D. With spears (and organs) thrust at the camera, and wide deep vistas of the laboratory, the overall look of the movie is pretty lavish. I'd love to see the fish tank and children's toy carousel in 3D. One notices the similarities in the lab here, with it's big marble walls, two-tiers, and center tank, and the one in The Rocky Horror Picture Show. I'd go safely out on a limb and say this film influenced the look of that.
Everything about this movie is over-the-top awful. Much like the enormous shears for beheading, you can't help but appreciate the bigness of it all. They can't just behead someone. No, there must be a dummy head that blinks and pours out a comical gallon of blood when held aloft. The Baron must bring his creations to the dinner table where Dallesandro can do a triple-take, yet still seem to barely register his surprise at seeing his dead friend. Kier zestfully forces his zombies to kiss, and his and Otto checking zombie Sacha's penis for a response in between every peck is hilariously odd. When the bodies stack up at the end, it's a rapid body count worthy of Hamlet, but considerably more over-baked. (Kier actually crosses his eyes in pain at one point, and Otto mugs for the camera when getting throttled.) I mean, we're talking BIG.

All the effects here are fun. The movie's filled with lots of fake torsos and bright red blood that doesn't hold up to today's effects, but they still please the eye. The organ meats are at least nauseatingly real. There's a pair of breathing lungs that make for a nice effect. Van Vooren herself is almost a special effect. Her bone structure and lack of eyebrows disconcert, her bones are so pronounced one would almost expect she suffers from acromegaly. She also reminds one of plastic surgery nightmare Jocelyn Wildenstein.

Many genre fans are also familiar with Nicoletta Elmi, the odd red-headed child who made memorable appearances in Baron Blood, The Child, Demons, Bay of Blood, Death in Venice, and Deep Red. Her mute presence in Frankenstein as one of the Baron's spooky brats is the creepy icing on the cake. The children see way too much. Their presence may be the biggest ick factor in the movie.

It's ridiculous, it's gory, it's over-the-top. Beyond everything, though, Flesh for Frankenstein is worth a watch. It's not quite as haunting the second time around - perhaps memory and youth made it much more gruesome than it is, but the "appalling" factor remains unchanged. You have to watch, otherwise the Baron would have "died in wain."
Posted by Jay at 10:00 AM