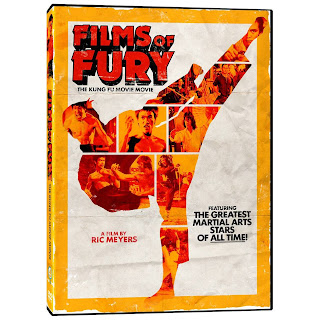 Including all kinds of Martial Arts films, from both East and West, Films of Fury leisurely walks through the evolution of Asian action cinema. It makes for a film class education that's absolutely painless. From Jimmy Wang Yu and Bruce Lee to Jackie Chan and Jet Li, Films of Fury illustrates the genre through clips rich with wit and action. Regardless of your Kung Fu IQ, this is one of those movie docs where you'll want to keep a notepad handy to write down titles. Never seen Once Upon a Time in China, Enter the Dragon, Police Story, or Kung Fu Hustle? You'll want to rectify it immediately. The doc also puts Game of Death and the Bruce Lee rip-off movies in their proper place.

More focused on what's on screen than who was behind it (the Shaw Brothers are noticeably absent), this irreverent and casual documentary is still the best, most-watchable movie about movies since Not Quite Hollywood. (One has to wonder, though: if Bruce Lee had survived, would he be as high on his own press as Chuck Norris got?)

Skimpy features. A few trailers and some downloadable chapters from Ric Meyers' "Films of Fury: The Kung Fu Movie Book," upon which this documentary is based. The film is presented in 16:9 widescreen and Dolby Digital 2.0 English. There are no subtitles, but the film is closed captioned.

Films of Fury proves that everybody WAS Kung Fu fighting... because it was awesome. A highly watchable, entertaining look at Martial Arts genre cinema.