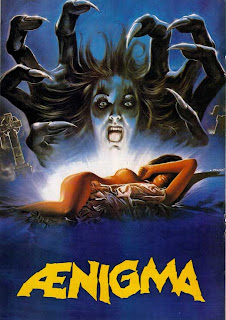 I'm going to start calling my One-A-Week reviews my movie of the week. Why? Why not? No better way to start than this howler of a horror that actually gets better the more you think about it...

I haven't liked any Lucio Fulci movies made after The House By the Cemetery (with the possible exception of Cat in the Brain). They're awful; totally overrated by fans. I know this, and yet I keep watching. I guess it's just the completest in me. Aenigma came out in 1987, and didn't even make it to the states until 2001 on DVD. Is it any good? Well... a bit?

In the world of horror movies, everyone attends school well into their thirites. Seriously, some of these students look older than the headmistress. Eva Gordon arrives at St. Mary's school in, evidently, Boston-Herzigovina. (This is Yugoslavia standing in for Massachusetts.  All she wants to do is make out with "as many boys as possible." It's a shame she winds up quickly possessed by Kathy, a student hit by a car after being humiliated in a prank played by her classmates. Kathy is supposedly brain-dead, but evidently psychic. She make your reflection break through the mirror to kill you and also turns snails into carnivorous murderers. (Yes, snails, and it's hilarious.)

Students start dying, and Eva winds up seeing - and seeing - a doctor. He'd come off like a letch if she came off like a schoolgirl. She doesn't just kiss him so much as she climbs down his throat. He's not a very effective doc, though, as students continue to die, and Eva loses it more and more. One can assume Kathy was an art student, as she also likes to use art to kill. The story starts choppy and gets worse, but it stays mean-spirited throughout. When the story takes Eva away from the school, the doc starts immediately dating another student in a montage playing under a love letter Eva writes him. It's a smarter sequence than you'd expect from this movie. (The spookiest shot in the whole film, though, seems to be something of an accident. Someone reflected in a television monitor for a moment who isn't part of the story. Subtle and effective enough to clearly have not been intended.)

A weird mix of Carrie, Patrick, and Phenomena, with just a dash of Suspiria, this has all the signatures of a later Lucio Fulci film. It's garish, totally nonsensical, and somehow looks more dated than any other eighties movie you've ever seen. His trademark gore is in short supply here, people even get killed off-screen. There's a few headless corpses, and the Kathy "coma" makeup is actually a bit off-putting.

There's not much logic to Aenigma but there's creative lighting and camera angles to enjoy. The framing is frequently shoddy, and there's some of the most laughable zoom abuse you'll see outside of a Jess Franco movie here. One effect, involving a bleeding painting, is framed and shot so badly that what could have been brilliant just evokes a "huh." There is also a crane shot with miniatures used to establish location that is more charming than jarring, but it's as artificial as the obviously-not-Boston setting.

The actors all seem mediocre, but that terrible 70s/80s horror film dubbing is also in effect. There's a few breathy women's voices that I swear appear in ever single one of these flicks. The ending (mama ex machina?) is a cop out, but surprisingly well-staged. On the whole though, it's a better film than you expect from how it starts. More importantly, after you watch it, it's one of those movies that actually gets a little better in memory. You forget the awkward parts and remember the moments that are actually inspired.
Posted by Jay at 5:42 PM

Email ThisBlogThis!Share to TwitterShare to FacebookShare to Pinterest
Labels: aenigma, horror reviews, jay's movie of the week, lucio fulci, One A Week Reviews