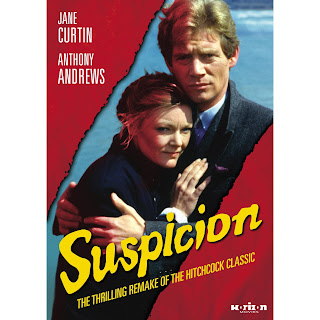 I stray from my usual horror and genre fair with something a little more high-toned, like a stifled remake of an Alfred Hitchcock movie. Verdict: They were asking for trouble from the get go.

Marry in haste. Remake in leisure. Watch in boredom. (Originally reviewed for DVDsnapshot.com)


Official Synopsis:
A powerfully tense remake of the Alfred Hitchcock classic, this British production of Suspicion boasts a dynamic cast, making it a worthy descendant of the original.

Anthony Andrews (The King's Speech) stars as notorious playboy Johnnie Aysgarth, a seemingly wealthy and carefree bachelor. Jane Curtin (Saturday Night Live, Coneheads) plays Lina, a lonely American who is instantly charmed by Johnnie's arrogant wit. After a whirlwind romance, the couple marries, after which unpleasant truths begin to emerge. Johnnie is broke and a compulsive gambler, a deadly combination. Desperate for money, he starts borrowing against her life insurance policy, and curiously develops an interest in murder mysteries. Lina soon fears for her safety, her paranoia exploding into hysteria after one of Johnnie's friends suffers an unfortunate accident.

A white-knuckle thriller directed with elegance and a morbid wit by Andrew Grieve (Agatha Christie's Poirot), Suspicion is a well-executed mystery that will raise goosebumps, and perhaps some suspicions about your own spouse.

Our Take:
The original Suspicion is one of the few Alfred Hitchcock films I haven't seen. A failure for a film reviewer, but it means I can't compare it's style, flair, or big stars against this American Playhouse television adaptation from 1988... which is good as this remake lacks both style and flair.

Johnnie is a dead-broke blue-blooded playboy who meets Lina, an American her own wealthy parents describe as “spinsterish.” Their short courtship, based on mutual-but-incompatible needs, leads them to marriage while they're really still strangers. Lina quickly learns it's not a good idea to get involved in a man you think might be trying to murder you. Is she paranoid, observant, or just working out how much she screwed up by marrying this cheap jerk?
Andrews and Curtin were well-known TV properties and Barry Levinson co-wrote and produced this, so that's a good pedigree for what is still a “movie of the week.” Adept comics are frequently good in dramatic roles, but Curtin is stiff and distinctly out of her element. Her unease seems more with the material than because the character is afraid of the husband she lacks any chemistry with. (You hope she took the role less as a dramatic challenge than for the trip to England and Ralph Lauren wardrobe.) Andrews steps on his light dialogue while the pacing and direction step on any suspense.

Marry in haste. Remake in leisure. Watch in boredom.

Special Features:
Absolutely none, this is a no-frills disc of a TV movie. Don't be surprised by the film grain, mono sound, and full screen, 4x3 image, that's just how they made 'em back then. Most distractingly, the audio never seemed correctly synched with the picture.

Conclusion:
An American Playhouse pedigree can't save a bad-marriage mystery that would be pointless even if it wasn't a Hitchcock remake.