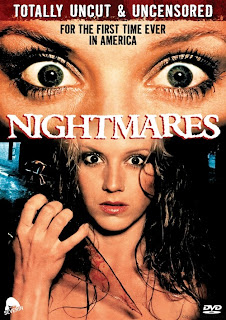 Nightmare is definitely a product of its time as a circa-1980 slasher film. In such a film, a couple having graphic sex in an alley can't really complain if someone comes along and finds them. This includes the audience gaping at the indulgently gratuitous nudity (and those round vaccination scars anyone who doesn't have one has probably forgotten about by now). The couple is, however, allowed to be startled by a high-heel wearing slasher. To sum the plot up in one run-on sentence: a young girl is traumatized by inadvertently causing the death of her sexually active mother then grows up to be an actress in a theater production where all the understudies are getting promoted because someone is killing off the leads. Could these two things be connected? Well, not to spoil things up front, but there's no real mystery to the proceedings. Helen (Jenny Neumann), our protagonist, spends most of her screen time flashing back to either a death scene or yelling at herself behind closed doors. When a film doesn't bother to have you guessing whodunnit, the shots from the killer's point of view seem more appropriate to an experiment in first-person character study.

There's some stalk and slash as company members wind up taken out by large, jagged pieces of glass wielded by our just-out-of-frame protagonist... I mean, killer. There's something of a running joke about TV actor Terry violating every theater superstition out there, and it's the closest thing to "misdirection" this film has. It's hard to figure out why Nightmare plays out like it wants you guessing who the killer is, since it's an open secret from the get-go as to who it is and why they do it. Even if they'd thrown some sort of twist in to make someone else the actual villain of the piece, it wouldn't make sense. This is just a study of a crazy lady taking a creative approach to dealing with the ghosts of her past and crappy co-workers. Why our trusty slasher doesn't pick the theater director to knock off first is beyond me.

There's a lot of technical issues to go along with the unnecessary slasher trappings. The score, by the Australian composer Brian May (and not the Brian May from Queen), is heavy handed beyond the point of parody. The editing is either choppy flashback cuts or interminable fade-outs. Then finally there's the acting. Uniformly undistinguished. Jenny Neumann's flat, unexplained American accent in the center of all these native Australians just makes her stand out with one more layer of detachment. She's crazy and she talks funny. Neumann is best known for being in Hell Night and "V," and retired in the early nineties. She's beautiful and stiff, but in her defense she's mostly just asked to stand there; widening eyes and flaring nostrils for yet another flashback cutaway. She's a strong enough center a silly, sleazy slasher like this. About the only other character to make an impression are the director and Bennett, the bitchy and lecherous theater critic. Once he's dispatched, you're ready for the curtain call.
Posted by Jay at 10:00 AM