Ooh, baby. I thought Turbulence II was a satisfying dish, so I had no choice but to have Netflix send over Turbulence III: Heavy Metal for my delectation. This go around, they trot out the stock footage of our intrepid TCA airlines jet for one last round. We have bad weather, bad acting, bad music and just a soupcon of satanism. 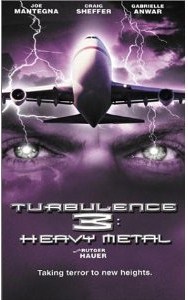 Right out of the gate it doesn't fail to satisfy. Slade Craven, a death metal icon (read: Marilyn Manson) has gotten approval to have his retirement concert on board a 747 flying from LA to Toronto... which is absolutely absurd to the point of painful. The faux MTV hostess Erica Black is excited to point out the plane, kitted out with cameras and a stage(!), will be streaming live and they want 10 million viewers (remember that number as it comes into play later). I find it surprising they'd gamble on a reliable video stream from an in-flight 747 in 2001, but that's the sort of logic that makes this is a straight to video feature.

The spoilsport in me rolls my eyes at the idea that anyone would sign off on this insurance nightmare - maybe this is a fantasy  picture? The audience, an in-flight cabal of goth-metal heads kitted out in chains and studded collars are a quaint reminder that this was definitely filmed before September of that year. I mean, no one even has to take off a metal-plated boot or belt buckle!

Our B-movie stars start rolling in to fill out our plot points. Rutger Hauer will be totally wasted as our dashing co-pilot for this hopefully ill-fated flight. His main purpose seems to be to quickly mention impending heavy weather, the de rigeur complication for any airplane-set flick, then later glower while listening to opera. Joe Mantegna and Gabrielle Anwar (barely hiding her British accent) are our good guys from the FBI, chasing a hacker named "Spectre" who'll be somehow tied in to the flight. "Spectre" is Craig Sheffer, playing a completely different character than he did in Turbulence II.

Sheffer's hacker is pretty harmless, seemingly wanting to just tap in and watch the video stream of this godawful concert and accidentally catching a murder. We're treated to a couple musical numbers, all awful - though they seems to be having a grand time channeling Marilyn Manson's greatest excesses. The musical numbers are bumpier than the weather - turbulence creating by camera moves and stock footage. Anwar winds up teaming up with Sheffer, but it's hard to get engaged in the off-plane parts of the story, especially when you quickly realize they'll be doing an "adversarial flirting" shtick. Her role seems to consist mostly of wearing eyeglasses and raising her hand to her face. Now that is characterization.

The big flaws in these kinds of movies are always the Ground Traffic Control scenes - changing those to two actors in a big apartment looking at computer monitors is even lamer... though not as lame as the other land-locked pair, the quasi-MTV office crew. The big problem here is bounce around from the plane, the apartment, the FBI, Air Traffic Control, and the TV control room. It's just too open. You're never asked to keep track of this many locations in Airport '77, by golly.

People start getting killed by a Slade Craven who seems to have started believing his own press. There's an attempt at commentary about people being willing to watch anything, but commentary is kind of wasted on an audience already willing to go along with the idea of a death metal concert happening on an in-flight 747. Absurdity follows absurdity with a blown-up control tower and some evil-twin action (save your spoiler complaints for a good movie, eh?) as the evil plan turns out to be a plot to use a death metal concert and crashed airplane in a pact to raise the devil. John Mann plays both Craven and his doppelganger and he seems to be having a fine time here. Looking for all the world like Peter Steele playing The Crow, flaring eyes and nostrils with equal aplomb, he's generally more dynamic than all of our "stars" turning in one or two day one-set cameos. "Gothy Rock Star as Unwilling Action Hero" is possibly this flick's best invention. He also gets to have fight scenes with himself (well, his body double), which is surprisingly charming.

Turbulence III is overall pretty bad. Slow starting, then seemingly quick to dispense with it's bad guys as it skips from trauma to trauma on it's checklist, it lacks the dynamic, overstuffed craziness its predecessor had. It also consigns Craig Sheffer -dragged up in a do-rag to look like David Foster Wallace- to an office chair and probably clock-watching while filming to claim his paycheck. Not even a remote control landing at the end can redeem it. There's some cheese pleasure here, and Mister Mann is worth watching, but in the end things are just... well, uninspired isn't the right word, and neither is boring. I'll settle on "absurd."
Posted by Jay at 8:50 AM