One A Week Reviews #14 Dark Fields

A surprise in an unassuming package this week. This review for dvdsnapshot dug into Dark Fields, a novel of a film worth checking out. 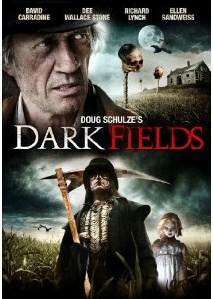 When the drought-stricken farming community of Perseverance resorts to human sacrifice to bring healing rains to their land, a terrible curse is unleashed that haunts the bloodlines for generations. More than a century later, one of their descendants is struck by a horrible affliction and must commit an unspeakable act of murder to remove the curse once and for all.
Our Take:
Originally called The Rain, Dark Fields is auteur-stamped by Douglas Schulze and certainly a crack at an artistic statement. Three intertwined stories make the film up, set in the town of Perseverance in the 1880, 1950s, and the present make for a surprisingly accomplished, low-budget novel of a film.
In the 1880's David Carradine stars, in one of his final appearances, as a man who brings a curse on his home town. During an awful drought, a deal with a Shaman brings rain to save the people, but it carries a price that goes on to affect 1950s matriarch Dee Wallace, forced to hide her daughters and her drinking water from her husband. Thanks to what the curse does in your adulthood, her mother's love may not be able to save the sacrifice the curse requires. Collegian Cari in the Present Day is a shy thing, using college as a way to avoid Perseverance. Unfortunately she can't hide from the curse. She returns home to a ragged Richard Lynch,, who show her the way of the cure... and it's perverse care and feeding.
With sacrifices to a low budget and loose pacing, the overall feel of the film is "unrefined." It looks grim; all flat,cool lighting and grainy resolution. It's rarely high tech. If anything, some scenes towards the end are filtered down to the point of inscrutability. The three time periods have different looks, but it holds together nicely. They segments flow at a pace that allows the story to breathe more than drag. Things do start to feel too long towards the end.
While the CGI "dessication" was eye pleasing, the rest of the other effects come of as extremely professional. There's an inspired, not-flashy composite shot that's the most ambitious I've seen in a B-movie in quite some time, while other CGI is over the top. There's also some nice squirmy moments, though this is a film more about building unease than just jump scenes.
Thought and work went into this film, and the three stories play like variations on a theme. Added to that are some moments of genuine inspiration. It doesn't all make sense, but it feels like an original, reminiscent of Larry Fesenden and Don Coscarelli, and certainly the sign of a promising future.
Special Features:
Dark Fields is presented in 16:9 widescreen in Dolby English audio with English SDH subtitles. The DVD includes trailers, a behind the scenes featurette, deleted scene, animated storyboard and an audio commentary track with the director.
Conclusion:
Dark Fields walks a fine line between measured and slow. This trio of stories narrate a family curse filled with some old tropes, but still manage some inspired, if occasionally convoluted, moments. Original, it prefers growing creepiness to shocks, and does a good job of subtle disturbance. Doug Schulze put his name all over this, and with good reason. It's a calling card of a film, and worth a watch.
Overall Picture:
Show: B+
Extra Features: B+