One A Week Reviews #6 Mother and Child

This week's movie, reviewed for dvdsnapshot.com, wants to be a classic drama but falls just a tad short of the mark... 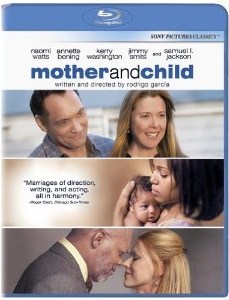 Official Synopsis:
From writer-director Rodrigo Garcia (TV's “Big Love,” Nine Lives) and executive producer Alejandro Gonzalez Inarritu (Babel) comes the moving story of three women and the power of the unbreakable bond between mother and child. Three women's lives share a common core: they have all been profoundly affected by adoption. Karen (Annette Bening) placed a baby for adoption at age 14 and has been haunted ever since by the daughter she never knew. Elizabeth (Naomi Watts) grew up as an adopted child; she's a bright and ambitious lawyer, but a flinty loner in her personal life. Lucy (Kerry Washington) and her husband are just embarking on the adoption odyssey, hoping for the opportunity to become parents.

Our Take:
Mother and Child is composed of moments in the lives of three vaguely connected women and the relationships in those lives. All three are strong, though two hold people at arms length, bitter and angry, and one will go through anything to convince herself things are going to work out.

The center figure is Karen, who gave up a baby as a teenager. Caring for her aging mother and with no friendships, she's bitter and lonely. Her only outlet is the diary she keeps, written to the child she gave up. Elizabeth, the child she's never known, is a driven lawyer who keeps everyone at a distance. She's a manipulative, angry jerk, playing with the emotions of both her boss and neighbor. Watts and Bening almost play “nature versus nurture,” both are so aggressively brittle. (Between this and The Kids Are All Right, Bening is currently producing some amazing work.) Elizabeth is so shaped by her isolation she can't even be in a room with a laughing family.

Meanwhile, Lucy has a husband she's connected to and they are looking to adopt. She's even willing to be put through the hoops by Ray, the world's champion meanie birth mother. Her journey is to discover her strength in the face of adversity.

The cast is uniformly excellent. Jackson, for once, is playing something other than a belligerent badass, and one can forget he's capable of such subtle work. Amy Brenneman, David Morse, S. Epatha Merkerson, and Elizabeth Pena show up in small roles. Cherry Jones glows as a nun involved with adoptions and Jimmy Smits gives warmth to a small part as the man who comes into Karen's life.

Sadly, this gorgeous, measured movie, composed of moments as it skips back and forth between it's story lines, stays distant and cool for a good portion of it's run. Even as the two central glaciers crack and let love in, they've created such a chill it's hard to bridge the distance between them and the audience. The warm, strong heart of the film is really Washington, though her character gets as battered by experiences as the others. By the final act of the film, you'll find yourself engaged and moved despite the off-putting start to the film. Mother and Child is an excellent,moving drama, what they used to call a “womens' picture,” but it's honest about the pains and rewards of family and worth experiencing.

Audio and Video:
This DVD looks terrific, practically 3D at times the image is so vivid, crisp and clear. The color and depth of the cinematography are especially well served here. The audio was also clean and subtle. Menus however, are a little choppy, tedious but easily navigated.

Special Features:
Mother and Child is presented in 1080p High Definition, widescreen, and in English 5.1 Dolby Digital audio. English and English SDH subtitles are available. Special features include 2 documentaries, the production diary “Creating the Family Tree,” and “Mother and Child,” about the universal experience of motherhood. There are also three deleted scenes and a set of previews.

Conclusion:
In Mother and Child there are several women, all mothers and children creating family relationships through sheer willpower and patient journies. This is a beautiful, mannered drama about familial relationships with a very chilly start, but in the end, quite touching.