I reviewed Gigantic back at the beginning of August, but it kinda fell through the cracks a bit. Belated, but now posted for your perusing pleasure... or rather, warning that you can skip viewing the actual movie if you want... 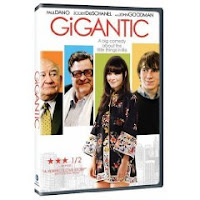 YNOPSIS:
Get ready to laugh with this romantic comedy that’s anything but normal, starring Paul Dano (Little Miss Sunshine), Zooey Deschanel (500 Days of Summer), John Goodman, (Confessions of a Shopaholic) and Zach Galifinakis (The Hangover). Mattress salesman, Brian gets swept up in a romance with the lovely but misguided Happy when she comes in to his store one day and falls asleep on one of the beds. To win her over, he must compete with her bear of a father, an art-collecting loudmouth with a bad back and deep pockets. Gigantic is a funny, surreal love story about the anxiety that comes when two people with crazy families collide unexpectedly and fall for each other.

I can't quite put my finger on what's going on in Gigantic, but it's not romantic and it's not comedy. It's moments of beautiful grace, a very respectable attempt, and excellent acting assembled into an odd mess of a construct.

It feels like it wants to be a whimsical indie comedy. You have a lead character (Brian) who shuffles thru life working at a mattress store (wacky slacker job), trying to adopt a Chinese baby (because he always wanted a younger sibling -a fact drawn from the life of the director), and from a dysfunctional family of older brothers and elderly parents who, among other things, make Shroom Tea for the family.

Also, Ed Asner shows up to be the above mentioned 'Shroomin' dad and John Goodman plays his gruff notes as Happy's rude, grouchy, rich dad. A character mostly known for having a bad back and traveling everywhere reclined. The regal Jane Alexander shows up for a few quick scenes towards the end. In fact, her character is there to serve one purpose in one conversation, but it's still nice to see her.

Then come the more serious parts. The adoption subplot seems more unlikely to succeed than anything else. The rhythms of the comedy are plodding when they should be light. I don't think I laughed once. As a drama, I would have adored this. With the attempts at “whimsy,” and general “Sell” from the DVD packaging that this is a comedy, I'm left asking the age old question. “Que?”

Finally, there's the Zach Galifinakis problem. I just can't figure it out. He's credited as “Homeless Man,” and just shows up occasionally to beat or shoot at Brian, then in the end turns out to be... well, I don't know what. Something happens towards the end of his character arc that really queers the deal with this movie. The hopeful warm ending becomes almost a little scary when you wonder just what this adopted baby (delivered via the Deus Ex Machina Express, no less) is being dropped into. The tone is thrown off in ways it doesn't recover from. It can't.

In the end it's not whimsical nor witty, and it's not a drama (tho it is a tad disturbing). It's serious and slapdashedly resolved. The saving graces come in the scenes it's assembled out of. Awkward dates with parents, family dinners, a fumbling conversation or two. Weird characters populate the peripheries. If it didn't feel like they tried so hard for the “Whimsy,” or some “let's wrap this puppy up and go home” cheats, this would be a much better movie.

SPECIAL FEATURES:
Auto launches with a trailer for Tennessee, which looks to be an overly-earnest, unwashed road trip film starring Mariah Carey and 2 unwashed angsty guys who I’m betting are really obnoxious. Enter at your own risk.

The Menu only offers Scene Selection, Play, Audio, and Bonus
Audio offers 5.1 and 2.0 English Dolby. No Subtitles. (which is an immediate half a point off from this reviewer and his noisy environment)
Bonus Features:
-2 deleted scenes, one of the kind of “is this whimsy” that permeates the whole movie. No reason I can see to have cut it.
-An Alternate Take of one scene. Some productions stills.
-The Trailer: You can figure out “Beds, Adoption, Zooey” and the boast of being from the producers of “Junebug” and “I’m Not There.” One shot in the trailer is scored and cut to almost imply Brian has shown up at Happy’s house for a profound romantic interlude. In the actual movie it’s the scene where he shows up to see where she works…a glaring cheat that threw me out of the actual movie entirely, since I watched the trailer first.

The film is R-rated and 98 minutes long


CONCLUSION:
The sum of the parts is underwhelming, but the parts have some moments of grace to them. A very long-distance nude Deschanel and some Shroomin' (while approved by the elderly), may make you hesitate showing this one to the kids... as will the general tone that hangs over the moments that should be madcap because the character keeps getting random assassination attempts made on him...

The actors are fine. The cinematography is beautiful. A composition of Deschanel on a mattress in all grays, blues, and blacks, from her eyes to the blankets, with her popping white face in the center is worth watching the whole film for. There are moments here.