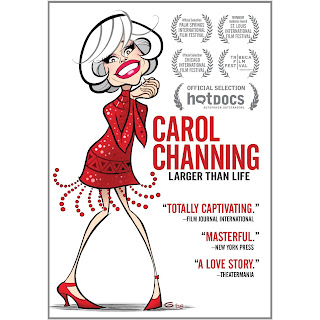 The Tony Awards recently aired on television, a quaint throwback of a big awards show paying tribute to an art form that's unique in still being mostly geographically-specific. Some see it as the hopelessly retro province of Midwestern tourists and “show queens,” but in a world of digital streaming, you still have to go to Broadway (or hope it comes to you) to attend over-the-top, show-stopping live performances by occasionally legendary talents.


Carol Channing is an entertainment icon with a big personality. A stage legend who created roles in “Gentlemen Prefer Blondes” and “Hello, Dolly,” she's a showbiz trooper who worked grueling tours and Broadway schedules well into her Seventies. Channing never made much of a splash in the movies (too big a personality) or TV, but who in America can't identify those big pop eyes, the huge smile, and that raspy, sibilant voice? 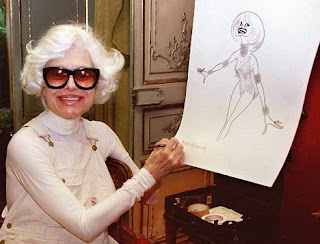 Carol Channing: Larger Than Life documents her life on the occasion of her Ninetieth birthday. Healthy and sharp, shuffling slowly though still lean thanks to those decades of dancing and singing, Channing first entered a theater at age seven. She went on to meet royalty, presidents, celebrities, and millions of Average Joes all across the country, usually while slinging “Diamonds Are A Girl's Best Friend” or braying that “Hello, Dolly” theme. At 82, she also reunited with and married her Junior High love, Harry. Their love story gives the film a sweet center. Her son is only briefly mentioned and her previous (3rd) marriage of four decades, Charles Lowe, ended in betrayal and financial disaster.

By all accounts it seems like Channing was kind on her way up the ladder, because this is stuffed to the gills with interviews. A wide variety of celebrities, co-stars, and her chorus boys share what seem to be genuinely warm, well-loved memories. Channing shares her own stories through new interviews along with performance and TV clips, some dating back to the late Forties. She makes such a charming raconteur that, by the end, one is inclined to use the more familiar “Carol.” Nothing too incisive or earth-shattering here, but this is time well-spent for anyone interested in the history of American entertainment.

Presented in a 16:9 format with both 5.1 Dolby Digital and 2.0 Stereo English audio and SDH English Subtitles. Extras include trailers and 15 bonus features of extra interviews and material. At 47 minutes, it's makes an entire third act to this 89 minute documentary.

Carol Channing is the history of American musical theater in the Twentieth Century, and to spend some time with her seems utterly charming. Carol Channing: Larger Than Life is a light, lovely tribute to a unique national treasure.