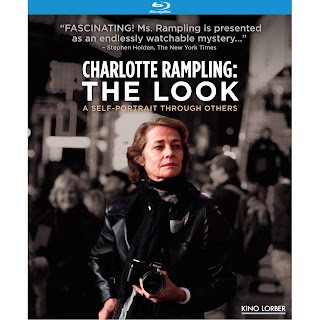 
The conceit here of a "Self Portrait Through Others" should be a smart way to get a subject feeling comfortable enough to open up. The series of discussions held here by Rampling and friends feel like a celebrity interview show. Unfortunately, most of them are self-consciously staged. The woman in question turns out to be observant, intelligent, and realistic. She muses on a series of topics including life, aging, film acting, and beauty... but is also never less than pre-meditated. As The Look keeps you conscious of the camera, and reminds you how good she is in front of it, you have to ask "Is she performing for it as herself, or just performing?"
Furthermore, her interview partners are never formally introduced. The audience is sometimes left to intuit who's who, how close Rampling is with them, and what's being discussed. By the time you get to the "Taboo" sequence, if you're not invested in this approach, you'll wind up possibly alienated by some of the self-indulgent subject matter presented with half the film still to go. The most striking thing you might take away from the transitory structure and fleeting conversations is that she seems, not lonely, but someone perfectly comfortable being by herself.

The Look is strongest when just letting Rampling speak and underscoring the topic with her film clips. Turning a camera on someone and just letting them espouse ideas can be a risky business. Rampling delivers stimulating conversation while still keeping a bit of distance. Biographic details are eschewed here, but that's OK here. Sometimes, letting the subject express themselves through their own lens of experience reveals more than just reciting occurrences. Charlotte Rampling is a gracious hostess and seems game, but she never reveals her cards.

Disappointingly, there are only a collection of trailers and a gallery of film stills. This Blu-ray also lacks subtitles.

Charlotte Rampling: The Look is something of a vanity project, but one you're comfortable indulging. Interesting conversation with an intelligent, unique actress, but marred by somewhat pretentious structure and a dearth of biographical detail.

Movie: B- for the Rampling fan, a solid C- otherwise
Video: B-
Audio: B-
Extra Features: D