One A Week Reviews #3: Valkyrie 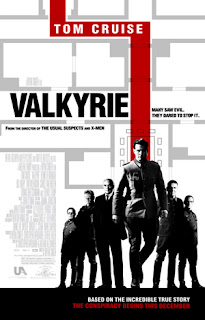 Sometimes, a boy who loves cheap little B-movies of ill-repute and varying quality must curl up with a big-budget stab at "Historical Epic." To class up the joint, ya know...

At least I picked one with Nazis in it.

Valkyrie is based on a real-life WWII conspiracy by a group of high-placed Nazis lead by one Colonel Claus von Stauffenberg to overthrow Adolph Hitler and take over the Third Reich. Bryan Singer followed up the brilliant X2 and the wildly uneven Superman Returns with this lavish, well-paced period piece that builds real tension out of events that we know going in didn't succeed. The co-conspirators attempted a handsomely-filmed coup to rescue Germany from Hitler's extremism with subtle special effects. (It only takes 70-plus years for film to play Nazis as individuals with conflicted consciences, and even then you're not that empathetic because, um... Nazis). A plan put in action at around the film's midpoint actually had me engaged to the point where I wondered if it would succeed. That's the sign of a well made thriller. The "Operation Valkyrie" section of the film is a fascinating race against the clock, while you wait for the other shoe to drop the entire time.

Tom Cruise plays the lead and, since no one is putting on garish German accents here, the other Nazis are pretty much all English actors. It is a movie truism that all bad guys have British accents, right? Kenneth Branagh and Bill Nighy counterpoint each other, the first now-doughy and the other resembling a sternly greased skull. Eddie Izzard and Tom Wilkinson, both barely recognizable when first seen, round out the conspiracy. Carice van Houten, so exciting in Paul Verhoeven's Black Book again enters the WWII film-fray as von Stauffenberg's wife. Sadly, she was only been given a series of meaningful looks to play in lieu of a actual, developed character and fades out early on. (Seriously, check out Black Book. It's awesome.)

(Now we talk about the big Movie Star, after the break...)

I've always been able to take or leave Cruise, but here I definitely warmed up to him through the course of the film. For once, Cruise's stern righteousness serves him well, though in the end it doesn't convince. His von Stauffenberg is a glare of determination, though from the beginning is played as a noble conscientious objector of a Colonel. Everyone else seems a man driven to risk his life because he knows it's the right thing for him to do (and that it will get him killed), while Cruise just seems like the central plot "May Pole" to hang everything on.

That said, he has an inscrutable poker face here that is new. Age (and perhaps working with Nighy and Terrence Stamp) has also given him a calmness which is a welcome evolution from his "Brash and Cocky" youth. At one point, he has to act while the audience's attention has been directed to his character's glass eye - a worry stone to only be popped in on formal occasions. It's not a subtle effect, but it works, and makes him empathetic when it would come off silly in a film not made this well.

It's an expensive, well-appointed film. Amazing how a smoky atmosphere can make many scenes seem decadent and evocative of the past. I think my favorite WWII set films of the last couple decades are Schindler's List, Black Book, Inglorious Basterds, and Shining Through, of all things. They focus on individuals wrapped up in the tides of war, like this film does. The difference here is just that the protagonists are the Nazis. (I do have problems separating the men from the fact that they're, ya know, Nazis. It's perhaps a bit like "Dexter." I never forget the character is a serial killer. I don't empathize and I don't root for him, though I always think the show's conceit is that they want you to with a wink and a nudge towards their supposed sophisticated smarts.) But as a story of a collection of men trying to do what they think (and history proved to be) right in a culture of pure, lethal fear and suppression, this is an excellent, thrilling film.