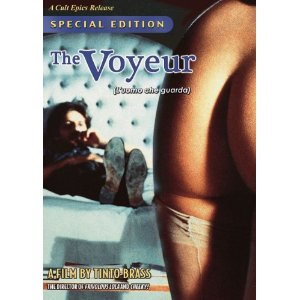 It should be noted from the get-go that this is an unrated movie “for mature audiences” only. There's lots of full frontal nudity, explicitly simulated sex, and erect (prosthetic) penises all over the place. Not to mention lots of shots (many with a camera and key light practically rammed right up it) of what's referred to as:

Dodo shares an apartment with his satyr of a father, a man with no scruples, boundaries, and a prodigious piece and Dad's maid, Fausta. She parades around in barely-there outfits, Lolita sunglasses on her ski-slope of a nose that eerily echoes the slope of her breasts. When not cooking for the father, she's warming up his cigars in a scene that, well, predates the Clinton trial.