One A Week Reviews #48: The Human Centipede (First Sequence)

You know you've been waiting to see this one. The highest concept movie in ages, reviewed by me for dvdsnapshot.com and your nauseated pleasure... also, this is my first review of a Blu-Ray. Score!


The plot is diabolically simple: two stranded American tourists are given shelter by a famed German doctor (a maniacally intense Dieter Laser) who made his fortune surgically separating conjoined twins. Now his mad genius is pushing the doctor to do the reverse. He tells the women that they will be surgically attached to a Japanese businessman - mouth to buttocks, one after the other – and thus will be born a net creature: the human centipede! Compellingly perverse, hilarious, and shockingly straightforward, director Tom Six's new film is hands-down one of the most memorable horror films ever.

Sigh, what do you do with a movie like this?

This reviewer scrupulously avoided spoilers and reviews before viewing The Human Centipede (First Sequence). Armed with only the description on the box cover and a general understanding of what would be encountered, I have to admit my second response was: is that all there is? 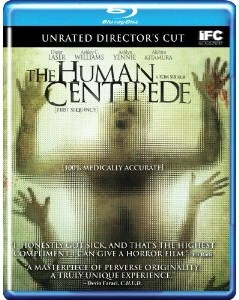 My first response was something along the lines of “Eww! Eww! Gross! What is he going to... no... NO... yuck!” This is a good thing, actually.

What you read on the box really is most of the film – no spoiler there – but thankfully, there's a little more to it than that. This is maybe the highest-concept movie ever made. It's all concept. You take your dread and squeamishness with you coming in, and it's paid off evenly. The highlight of the film might not be the surgeries or grisly conclusion, but rather Dr. Heiter (Laser) explaining exactly what is involved in the surgery. The film likes to mention “100% Medically Accurate” in the advertising. I don't know about that, but even the most hardened gorehound may not make it through his Med School 101 presentation without squirming. Three people, sewn together. 'Nuff said. It should also be noted this is not of the “Torture Porn” school, though it seems to have been sold as such. It's much more in the body-horror vein of David Cronenberg and the recent Splice.

The amazing Dieter Laser, a German actor who seems an odd union of Christopher Walken and Lance Henriksen, comes off like Udo Kier's dour brother. The glimpses of perverse black humor he lets slip through the coldest, most clinical bedside manner ever put to film, are the fuel driving the picture. If you have no other interest in seeing the film, put it on for his performance. Ashley C. Williams, the relative newcomer playing middle segment Lindsay, is the only actor with a lot to do, and half her performance is in her eyes. It's her wedge of face we turn to every time the ante of the impossible situation is upped. She is the figurative and literal center of the film.

The first watch is all marvel and disgust. The second brings black humor and you may be impressed that they sold this at all. The Human Centipede (First Sequence) is a lean, baroque, concept, and should be given at least one spin, if just to test your stomach.

The picture on this Blu-Ray in near-perfection. A slight artifact or two, but mostly the cool, blue florescent lighting of the surgical areas and warm, golden sunlight come through vividly. The picture is so crisp that some scenes with trees create such a depth of field as to give the illusion of 3D. The clean, spare widescreen compositions are presented intact.

The Audio is flawless, with subtle sounds jumping to your attention when least expected. Presented in English 2.0 (German and Japanese are also spoken and subtitled) with a spare score and fleshy, crunchy sound effects, it's worth turning up to let the audio wrap itself around you. Check out the Foley Session featurette for a truly nauseating look at the Butcher's Counter products used to create the films...ambiance.

Special Features:
Conclusion:
While it doesn't live up to the hype, The Human Centipede (First Sequence) is maybe the highest concept movie ever made. What you hear you're going to see is what you get, but the sense of dread and body-horror revulsion built along the way make it a discrete, baroque experience.