One A Week Reviews #45: Manson My Name Is Evil

This is an odd duck of a film - like a college theater production committed to film - that I reviewed for Dvdsnapshot.com. Perhaps you'd best judge it for yourself...
Manson, My Name Is Evil (Leslie, My Name Is Evil):

Official Synopsis:
Manson's bloodlust left a trail of dead bodies across the Los Angeles landscape. His resulting trial connects Perry, a sheltered chemist, to Leslie Van Houten, one of Manson's murdering minions.
Our Take:
Originally called Leslie, My Name Is Evil, the Canadian production Manson, My Name is Evil is a surprisingly bleak, somewhat comic look at the life of Leslie Van Houten. Skipping across the events of her life like a stone on a lake, her broken home and teenage pregnancy are glossed over as she's delivered into the hands of the Manson cult. The former Homecoming queen and other Manson girls are depicted like characters in a CW show, and balanced by the comic, Fifties-square Perry and his religious girlfriend Dorothy. They play like a sketch comedy look at wholesomeness, making for an odd contrast with the Manson crowd. Perry winds up a juror in this stage-play-like interpretation of the Manson trial and falls in love with Leslie in the process.
Van Houten has spent more of her life in prison than out at this point. The historical events she was involved in are such a sensitive American touchstone, still fresh in living memory, that the presentation here strikes an off note. Theatrical and experimental, with news footage and photographs of the time edited in to establish the tone of the era, the film combines the drama of the Manson family with Perry's sitcom life. The tone clashes sharply. Kristen Hager, playing Van Houten, Is passive, girlish, and awkward. She conveys the confusion of a drug-addled, lost adolescence convincingly. An empathetic anchor to the otherwise theatrical style of some of the proceedings. 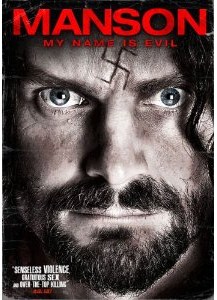 Manson's first appearance, sixteen minutes in, lashed to a crucifix in a barn for his stagey introduction to Leslie is the test moment. If you have an appreciation for history, perhaps it's best you tune out then. This clean-scrubbed, rosy-cheeked Family, petulantly following pleasure down the path of Manson's crazy, is hard to relate to. Manson himself is presented as rather silly here, a counterpoint to all the looming images of Richard Nixon that pop up throughout. The Tate murders are dispensed with in exchange for some spinning newspaper headlines. More attention here is paid to Perry and Dorothy necking on the beach. We're not spared the LaBianca murders, as Van Houten was personally involved in those. The talented Hager's passivity up to here makes the sequence the disturbing center of the film. Her performance keeps the film from flying off into the land of total satire. Gregory Smith as Perry (and it's just “Perry”) seems to belong in another story entirely, one that's a humorous spoof about sexual frustration in the repressed end of American Sixties culture. His bloody, Freudian dream sequence at the hour mark is one of the entertaining highlights of the film, mostly by virtue of being so over the top.
The mistake here, I suppose, is that the filmmakers are using the details of real life events here. If fictionalized, this would be truly effective. The moments of Psycho Beach Party tone and college theater staging clash with the Helter Skelter details.
Special Features:
Manson, My Name is Evil is presented in widescreen with English 5.1 or 2.0 Dolby Digital audio. There are Spanish subtitles available. The only other extras are trailers.
Conclusion:
After a glorious opening montage of images, the odd, stagey black comedy Manson, My Name Is Evil is a weirdly satirical look at the Manson Family murders. There's great talent here, as director Reginald Harkema and leading lady Kristen Hager are worth watching. However, the film is a theatrical meditation on the life of Leslie Van Houten. Performance art played out in front of giant crosses, American Flags, and Tricky Dicks. It lands sadly short of what the story deserves in it's telling.
Overall Picture:
Movie: C
Extras: C-
Posted by Jay at 11:52 AM