One A Week Reviews #42: Tormented

This review for DVDsnapshot was a fun one. A British teen slasher with a supernatural angle...
Tormented
Official Synopsis:
Can revenge reach beyond the grave? When Darren Mullet, an awkward, bullied boy commits suicide, few kids at his school can do anything but snicker, except for sweet Justine, who delivers a eulogy but admits she can't remember ever meeting the boy. But Mullet knew her, and remembered every humiliation he suffered at school. When his unrepentant tormentors begin getting weird and threatening text message from the dead boy's phone, they believe they're being pranked by his only friend, the timid Jason. But when taunting texts turn to actual torture and murder, no one at school is safe and everyone is a suspect – even Justine. The biting and suspenseful Tormented features a bright and talented young cast, including Tuppence Middleton (Chatroom), Alex Pettyfer (Tom Brown's Schooldays), Olly Alexander (Bright Star) and Calvin Dean (The Duchess).

Our Take:
There's something refreshing in getting reminded that “adolescents are mean, horrid, monstrous creatures” is an international condition. Lovely, quiet, “Final Girl” Justine is getting courted by Alexis, who draws her into his elite group of friends at the top of the High School social food chain. She eventually learns her new friends were complicit in the death of social outcast Darren Mullet, thought to be a suicide. At the post-funeral party, they start getting threatening texts from the dead boy's cell phone as someone is out for supernatural revenge. Justine's ignorance and complicity-after-the-fact, wanting acceptance, makes her Mullet's target soon enough. She starts scaling the social heights, but it gets easier as the ranks get thinned out in this Brit-take on the teen-slasher film. There's some I Know What You Did Last Summer mixed with some One Missed Call in Tormented. 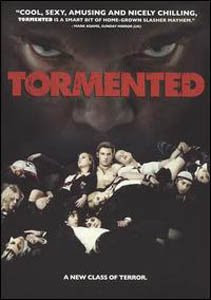 Besides the humanizing angle of Justine realizing Mullet carried a torch for her, the kids' personalities are all drawn in broad strokes: goths, nerds, cool kids. That's okay for this sort of film. It makes for easy storytelling when the chic clique is so obnoxious you're rooting for their demise before the opening credits are done. As British Society is more seriously regimented than in America, it shorthands an extra-vicious power structure. In fact, all the students are such magnificent jerks you're disappointed the ghostly Mullet isn't MORE creative in his methods of dispatching them. Not sure why he wastes time with kids from lower in the food chain but the killing eventually picks up speed The tubby Darren Mullet plays like the Japanese Ghost Girls, peering out behind a curtain of hair. When he appears, bad stuff happens to worse people.

While the overall pace of the film is a little pokey, it has a good visual look and the music is age-appropriate without immediately dating the story. You've seen this sort of thing before, but Tormented is, while not a classic, almost the “British Cozy Mystery” of the teen slasher genre. Bullying is a real problem, with very real consequences. This story would be terrifying without the ghost.

Special Features:
Tormented is presented in Widescreen aspect and English 5.1 Dolby Digital with English and Spanish subtitles. Trailers and a behind the scenes featurette are included on the DVD

Conclusion:
Tormented is an adolescent revenge fantasy with a supernatural-slasher bent that's an A+ for anyone who fantasized they could have pushed back against the bullies in their past a little more... forcefully.
For everyone else it's an enjoyably evil watch for a Saturday night with one's “mates.” You'll feel much better about your own friendships.