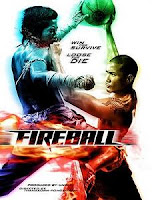 Gettin' my bloodlust on with an amazing Thai "Basketball meets Kickboxing" movie I reviewed for dvdsnapshot.com!

OFFICIAL SYNOPSIS
Just released from a juvenile detention center, Tai joins Fireball, an underground team playing ultraviolent basketball based on Muay Thai principles and hosted by criminal drug lords that he believes are responsible for putting his twin brother in a coma. No rules, no mercy, and only the strongest will survive.

OUR TAKE
Most movie plots are just a collection of interchangeable pieces, assembled like Legos. "One twin brother, newly out from jail, avenging the brutal assault of the other at the hands of the organized crime with the help of the twin's demure girlfriend who becomes slightly torn between the two" is a set of building blocks that's been used... well, "a few times" would be putting it gently. Subplots about one player trying to save his mom from eviction and another with a baby on the way are such old, hoary chestnuts they should be in black and white and from RKO. It's what you wrap around a movie's plot that sells it when it's an action genre picture.

In the case of Fireball, we get an undercover twin joining an underground game of basketball wrapped in Muai Thai Kickboxing. A solid martial arts b-picture creatively shot on video and filled with Thai atmosphere, most of the story plays second fiddle to the action, as it should.  The video look of hte film enhances the action scenes with it's realistic feel. When a body flies into the courts chain-link fence, you flinch back.

In Fireball the first team to score, or the team with the last man standing, wins. Avenging brother Tai and his team of merry misfits throw down some sweet action in the game scenes. A little CGI sweetens the pot and hides the wirework, but on the whole, Fireball is a kinetic, violent game that is, to its credit, shot in a manner where you can (mostly) follow the plays along with the punches. This game isn't shirts vs. skins, it's bleeds vs. breaks. The action scenes will bring you back to watch this one again and again, even if you're fast-forwarding through the boilerplate-plot to get to them.

SPECIAL FEATURES
Fireball is presented widescreen with options for both Thai and English 5.1 Dolby Digital Audio. Optional subtitles are available in English and Spanish. Trailers are included for a variety of Martial Arts and Ultimate Fighting films Wushu, Death Warrior, Four Dragons, Bodyguard: A New Beginning, Never Surrender and Fireball.  A nearly 12 minute behind-the-scenes featurette is included, and references the martial arts, wirework, boxing, and basketball that all got melded together in the film. All in all the typical, sturdy Lionsgate Package.


CONCLUSION
One to watch with your "Bros," Fireball mixes basketball with sweet martial arts action. 15 to 20 years ago this would star Jean Claude Van Damme or Don "The Dragon" Wilson, and be not nearly as enjoyable. This is a great mix of sports film and martial arts movie, and it's an energetic, satisfying, and bloodthirsty experience.

OVERALL PICTURE
MOVIE: B-
EXTRAS: B
Posted by Jay at 9:59 AM