This is the second of my "somewhat Monthly" column articles over at DVDsnapshot.com. This month I take a look at Comic Book properties, which can make terrific straight-to-video animated films with a ready-made market. What got me thinking about it is the (now recently released) Green Lantern movie, which I, of course, left out of the article...


THE BEST ANIMATED MOVIES YOU HAVEN'T SEEN YET: WHY NOT ADAPT MORE COMIC BOOKS? 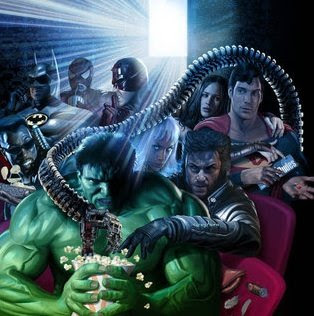 I'm going to take a sidetrack from the promised "Trash Cinema" for this column because I got to reflecting on something. Lately, and I'm expecting it's in response to increasing "grown-up" life pressures, I find myself returning to the juvenalia of my youth. Namely, I've become a hard-core Comics reader again.

I was a huge comics fan all through my childhood but pretty much gave buying them up cold-turkey at 18. College - with all the journeys of self-discovery and limited income it implies - beckoned. For the last decade I've kept a toe in the water. Picking up a graphic novel here and an issue collection there, I remained apprised of developments. Friends kept me updated with stories going on in the universes of "The Big Two," Marvel and DC. Toddmichael was dead on about Power Girl (those who know, know).

Part of being a comics fan is that you keep up with the movies and cartoons spun off of them. Even as a kid, I never understood why the stories couldn't just be spun off into animation. "It's all right there," I'd say. Adaptations alientate the hardcore fan in what they alter or water down for consumption by the masses – or as what it's really known to be, accessibility. While these characters and myths are incredibly adaptable and flexible, open to shaping themselves to whatever of your personal pathos you need them to; as ready-made entertainments, they're ripe for the plucking. It's easy to shave off the continuity back-bending comics writers get into to explain themselves out of boxes – it's easier to just leave Power Girl Power Girl, as was eventually proven right – and still keep the core of a ripping yarn.

Live action adaptations can be hit or miss. "Superman: The Movie" and "Batman" took over the world when they hit; even with all the story-tweaks they brought that left them both a little undersatisfying in the end. The "Flash" had a weird velveteen costume, rippled for your pleasure. The "Sable" TV series is as yet uncollected, a cold comfort indeed. The non-Superhero properties fare a bit better, though. "The Crow" was a dark, goth slice of heaven that hit at just the right time. (Being tinged with the real-life sadness that somewhat reflected the loss in the story never stopped haunting that film.) "Wanted" diverged wildly in some (most) ways from it's source material, but at least the fantastic, surreal traincrash and Santa Angelina (now spoofing herself while bending those bullets) made up for it.

The DC superheroes have always fared better than the Marvel ones. Is it because they're more "cut and dried" good v. evil fables than Marvel's introspective morality plays? Or is it just something Warner Brothers got right? (For every "Batman Begins," there's an "Elektra.")

The "X-Men" films stripped the big, dense, sprawling Chris Claremont epic -15 years of serial stories – down to a mobile of a skeleton frame, but they mostly worked. The first film picked and choosed enough to satisfy fans and the general filmgoer alike. "X2" brought back some of the darkness that had accumulated over the years – and played Jean Grey's death as noble self-sacrifice rather than the rushed, impulsive, editorially-dicated suicide it was in the books.

And then there's the "Watchmen." Pour millions into a complicated novel of a comics mini-series (yes, it was a series before it was the Grande Dame of Graphic Novels) that seems a little simpler and shows it's bones more in retrospect; and you get a big, sprawling film that actually plays it's weaknesses for strengths and does it right. Well, most weaknesses. The use of "Hallelujah" was unforgivable... It presented it's world as what it was, and an audience could take or leave it. (And if you take out all the slo-mo, an audience may discover it's only 90 minutes long, heh...)

Animation always called to me as being "where it's at," though. The fantastical can be hemmed in by green screens and the laws of physics. Pen and ink only know the limits imposed on them by the imagination.

As a kid, I loved "Spider-Man and His Amazing Friends." I was never clear how they installed all that flipping, computer-console backed furniture into that apartment, but it mostly took characterizations straight from the books. The animated film adapations coming out now are following that ideal.

"Superman: Doomsday" comes close to it's source material storyline. It cherry picks out of a year of "Death of Superman" stories to come up with a storyline that skips across the surface, hits a few highlights, but makes for a satisfying self-contained hour of entertainment. "Doctor Strange" adapts the origin story, mythos, and years of fantastical animation into a freestanding story about magic and maturation.

It's "Ultimate Avengers" and "Justice League: The New Frotier" who get it most right, though. Mostly leaping straight from the stories in the books, they show that graphic novel structure (and all monthly series seem to write now for the eventual six-issue story-arc collections) can easily adapt to cinematic flow. "Avengers" comes from Marvel's Ultimates line. Reinterpreted sixties origins with the new market's darker, pathos-ridden realistic stylings; it's gritty, propulsive and a bang-on shoot 'em up. These pop-culture icons the general viewer may not know well are just askew and new enough to be fresh.

"New Frontier" is the pinacle to date, I think. Taking even the aesthetics and character design straight from Darwyn Cooke's illustration – even the wide-screen framing of the images on the printed page – it's candy-colored pop art with a self-contained story. Comics fans are used to the stories of old being repackaged and reinterpreted yet again. Newcomers to the stories will find them rich and full even if they don't know how many storytellers laid the foundations. A fresh-scrubbed optimism in a 50s setting, it's as luminous and openly-sketchy as "Ultimate Avengers" is darkly, densly lined.

There's as many different illustrative styles as there are stories. I say keep the flow of these films coming. Kids like them, adults like them, and I'm betting they turn a profit and genrate loyal fans. Decades of work by creative talents have laid the seeds, and the new breed may prove to be adept at transitioning their work to movement. Mr. Cooke did a fab job, but just building on a legacy of animation design by the likes of Alex Toth and Jack Kirby.

If it's never viewed to be as high-culture as a Disney cartoon, that's okay. I like dancing teapots as much as the next cat, but if you gave me ninety minutes of moving Kirby I'd never leave the living room. I know lots of people who'll keep rewatching and keep reading -just like the True Believers they are.

THE FLASH: THE TV SERIES