You Should Really Go Down 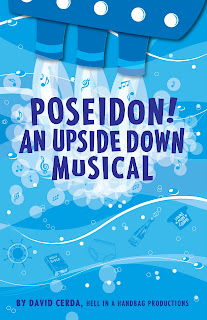 I'm unforgivably tardy with this note, but on Thursday I was lucky enough to attend the final dress rehearsal of a terrific new musical any fan of camp aesthetics should attend.

I'm not the type of critic who wants to tear down, I prefer to build up. Here, I didn't find much that needs building, really. This is the kind of bawdy, broad show I love. Just a sweet, funny evening with it's heart in the right place and a ragtag glamour worn like the finest furs.
"Poseidon! An Upside Down Musical" is a musical adaptation of the 1970s classic "The Poseidon Adventure." Written by David Cerda, it starts with a framing device of obsessive fans (not unlike "Rocky Horror" fans) breaking a newbie in on her first screening during their screening party. These characters recur and a few of their monologues run a little long. That, I'm happy to say, is about my only complaint with the show.

It's camp with a "Mickey and Judy in the Barn" style and the Falcon Theatre makes the most of the show in a barebones production. Some people may quibble of about the mostly bare stage and special effects no more expensive than blue silk standing in for flooding water. I say that's part of the charm -it's a show like following a silly track in your own imagination. Standard rules need not apply.

The large cast of 17(!) is talented and game to playing things straight, "Airplane!" style. I enjoyed the whole cast and thought they had great flair. It's not easy to be a big ham, without being a... you know... big ham.

The showiest parts are:
-the sexually precocious Robin is played by a very game Donnie McGovern having fun with a character who gets frankly a bit icky when they keep pointing out how young the character is in the movie. Otherwise he's selling dirty jokes with right.
-the sexually voracious Linda Rogo. Stella Stevens in the movie, a confident Marypat Carletti vamping it up in big hair and a tiny dress shirt.
-and, of course, the not-too-sexual Belle Rosen. This was the legendary Shelley Winters in the movie, here the delightful Joe Stollenwerk playing a true broad character more than the simple loud drag I expected. He gets the best running gags and one of the most enjoyable songs, which I believe was called "In the Water, I'm a Very Skinny Lady."

I was also a fan of Nonnie, the near-zombie lounge singer played by Michelle Shaffer and Carol Lynley in the movie. I love that particular kind of deadpan-dense character and wished for more of her.

The singing voices get a tad lost in the music tracks once in a while, but the cast seem to be accomplished singers. I'm not an expert, but I thought the songs were fun. While the program did not include the song titles, I tried to keep notes with a list that follows:

"Bachelor Haberdasher", a theme for the aging bachelor (read: asexually gay) Mr. Martin. A really fun tune with what I saw as a 50s flair.
"Upside Down"
"Just Panties (What Else Do I Need)" Linda Rogo's theme for slipping out of evening dress to skimpy dress shirt. This is actually a more logical transition than how they got Stella Stevens into it in the movie.
"Mr. Rogo, the Only Way Is Up"
"Air Pockets"
a little bit of "Mame" - I'm not sure if this is from the movie or inspired by the recently deceased Bea Arthur... it works though.
"Shut Up"
"Through and Through"
"In the Water I'm a Very Skinny Lady"
"Bad Girls Need Love Too" -one of the wittier ways to get a character off stage I've ever seen.
and a show closer that I think is called "Keep On Climbing".

In the end, I was entertained and left on a high with fun tunes still in my head. I really can't recommend "Poseidon" enough for a fun, no pretension evening of two hours of laughs.