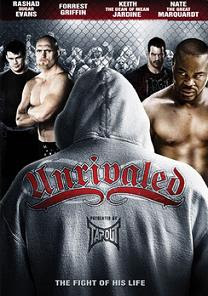 Do you like fighting? I'm not above watching a couple people beat the living tar out of one another, and thanks to this DVD I reviewed for dvdsnapshot, I got to do just that!

OFFICIAL SYNOPSIS:
On these streets everyone is fighting for a way out, but after a lifetime of hard knocks, a down-on-his-luck cage fighter gets the opportunity of a lifetime when he is chosen to compete against the MMA world champion during a massive competition. The stakes are high and the reward great... but should he lose, it will cost him his life.

OUR TAKE:
I love fighting.

Well, more to the point, I love watching a fight in a movie.  Sure, it's really just a dance with sound effects, but it satisfies the good old-fashioned primal urges. Now, movies featuring a bunch of ultimate fighters who aren't refined actors and is centered solely around cage-fighting? It turns out I can get into that as well.

Hector Echavarria stars as "Ringo Duran," an overwhelmed, overworked amateur Mixed Martial Arts fighter working to keep himself and kid sidekick, Link, afloat while living up to the memory of his mother, a gifted fighter in her own right. He fights a lot of people, scores himself a nurse-turned-strip-club bartender girlfriend, and gets an opportunity to take on the world champion MMA fighter. Will he step up to the cage and succeed during the biggest challenge of his career? Ever see a sports movie before?

The story itself is a shopworn underdog's tale, but thanks to some excellent production values, this is an easy-on-the-eyes watch. The actors are charming enough, even if most of them are real-life fighters instead of trained thespians. When a story straddles the world of underground fighting, mob debts, and his job bartending in a strip club, it's an updated Rocky for a bloodthirsty audience, but you know you've got a Friday night fights movie aimed at the boys.

SPECIAL FEATURES:
Unrivaled is presented in widescreen with English 5.1 Dolby Digital audio and optional English and Spanish subtitles. Along with commentary from the writer and producer, featurettes include interviews with the fighters, deconstructions of a chase scene and fight choreography, and a look behind-the-scenes. Trailers for other fight-centric films and some Tapout promos are included.

CONCLUSION:
A fairly handsome film about an ugly, brutish version of "The Sweet Science," Unrivaled features strippers, mobsters, Ultimate Fighters and entirely too much testosterone. A collection of various men's movie cliches, it's ever so refined, filled with violence, cursing, and naked ladies. If you'd like to watch a Mixed Martial Arts movie, or never seen one, this is an excellent introduction.