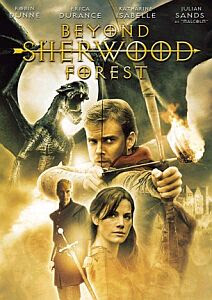 OFFICIAL SYNOPSIS:
12th Century England: It is a deadly time of dark tyranny, black magic and the outlaw archer known as Robin Hood (Robin Dunne of "Sanctuary"). But when the Sheriff of Nottingham (Julian Sands of "24" and Warlock) unleashes a winged monster upon the town and woods to massacre Robin's men and capture Maid Marian (Erica Durance of "Smallville"), hearts run cold with fear and streets red with blood. Before he can rob from the rich or give to the poor, can The Prince Of Thieves survive the demonic onslaught of a winged beast from another world? Katherine Isabelle (Ginger Snaps) and David Richmond-Peck ("V") co-star in this chilling new take on the infamous hero from director Peter DeLuise, filled with valor, vengeance and nightmare creatures that take you behind the legend and Beyond Sherwood Forest.

OUR TAKE:
Mash-up culture is all about taking two things and mixing them up into something derivative yet fresh, right? Beyond Sherwood Forest takes the myth of Robin Hood and adds dragons to the mix. Is it fresh? Eh...

The film opens as some kind of portal to a dimension of Dragon People appears in the middle of Sherwood Forest and lets one out (did someone watch Primeval perhaps?). Hunting it leads to the death of the father of a boy who will be Robin Hood at the hands of the Sheriff of Nottingham. Mash-ups add motives, perhaps?

When childhood friends Robin and Marian re-"meet cute" it leads to a scab-covered Prince John  releasing his captive dragon to terrorize the shire. Little John becomes cannon-fodder instead of comic relief, and many mediocre CGI effects died that noble day as our band of Merry Men travel to the "Dark Woods" of another dimension in the hopes of slaying a dragon. Mash-up rules, namely "everything AND the kitchen sink," had me hoping Cuthulu would should up there, but alas...

Julian Sands chews the scenery, slumming with his best Michael York impression and Katherine Isabelle appears as the girl who can turn into a dragon. Smallville's Erica Durance is a charming-enough actress but a very "modern" and "plucky" one.  Saying she's hard to buy as a princess of the Middle Ages is an understatement, but she's the most agreeable presence here, even with her less-than-passable British accent. The whole production is low-budget and has all the ambiance of a Medieval Times dinner or episode of Cadfael.

Robin Hood is a mythic hero of lore, and as such needs a leading man that conveys that quality. Um, all I can say here is our hero has killer abs... the rest of him has about as much spark as the overall production does.

The film is presented on DVD in Anamorphic Widescreen with English Dolby Surround 5.1 audio. Subtitles are included in English for the Deaf & Hearing Impaired. A short behind-the-scenes featurette and trailers for this film and InAlienable are included.

CONCLUSION:
I've never been much moved one way or the other by the Robin Hood myth, and Beyond Sherwood Forest doesn't convince one to pick a side. Nothing harmful here to turn off the teens, and not much to keep one awake on a Saturday night viewing party. Produced by the Starz channel but not even monstrous enough for SyFy.

All great stories could use a dragon, though. Just imagine one burning down Tara in Gone With The Wind.