Dvdsnapshot.com hooked me up with a no-frills review copy of Tony to review. I think it's coming without all that cinema packaging makes it feel like something underground; real and wrong. A DVD I think I almost want out of my house... meaning it's done it's job in terms of being effective.

OFFICIAL SYNOPSIS:
Solitary Tony (Peter Ferdinando) lives on the line of society and of sanity: Mostly he's home a 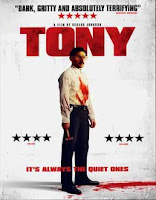 lone, cultivating a taste for 1980s action flicks, and when social interaction arises, murder is his solution to an awkward moment. Director Gerard Johnson's gruesome character study observes the inscrutable figure as he goes about the business of being maladjusted, misreading the world around him while remaining a mystery even perhaps to himself.

OUR TAKE:
Briefly, I think Serial Killers in fiction fascinate people because they act out, to the furthest degree, impulses and rages everyone else keeps bottled up, not feeling strongly enough to cross those lines. Fantasies and frustrations amplified into satisfying problem-solving.  Any true-life portrayal tends to be fascinate with equal parts deep fear and lurid fascination. I personally turn away from them when I know there were real people involved. The monster is front and center.

Tony is the most near-documentary, realistic-feeling portrayal of a Serial Killer I've seen since Dahmer. Some parts of this film certainly bring that one to mind. This is a simply structured "Day in the Life" story, totally lacking in glamor. Tony (Peter Ferdinando) is an unemployed, anti-social nebbish who lacks the skills to relate to most people. He wanders aimlessly through his awkward days, trying to relate to people. You'd think he was bringing  those drug dealers home to make friends... until the tools of his trade come out.

Truly terrifying images out of the grandest guignol inter-cut with the monotony of daily life. Murders punctuate his window shopping and visits to the unemployment office. Completely devoid of social skills, when he does interact with people it usually end badly for them. His visits to prostitutes and bars looking for companionship show someone who truly can't connect with other human beings. When Tony picks someone up at a club the sequence is almost unwatchable because you know the fate in store for them. The cumulative effect of the seeming normalcy and lack of slasher-flash creates a chilling and challenging film.

I watch a lot of this type of film and I think I'm inured to these things, but I think this one actually scared me.

CONCLUSION:
Feeling like Mike Leigh's made a serial killer film; the seemingly improvised, near docu-drama Tony is genuinely frightening. In fact, the feeling of realism renders it nearly unwatchable. Less than eighty minutes long it's well done, almost seeming at times like a satire a la "The Office," but at heart this a nasty little chiller. Extremely well made. this film is admirable but nigh-impossible to enjoy. Viewer beware.

OVERALL PICTURE
MOVIE: C+, then A-

The official site for Tony can be found here and features the trailer and all kinds of other information. The trailer alone brought back the chills, so I have to upgrade the rating I've given the film from a C+ to a A-. The qualities that made it so frightening on the first viewing lingered, and that staying power is the mark of a great scary movie.