Like many a bad Hollywood thriller of yore, this time we're looking at a "from Hell" thriller from Down Under for dvdsnapshot.com...

OFFICIAL SYNOPSIS:
In a desert fishing town, happily married Rob and Jess have been trying to have a baby for three long years and she is becoming desperate. In a drunken mistake, she sleeps with Evan, a young stranger come to town whose interest in her borders on the obsessive. The day she discovers she is pregnant, Jess' guilt turns to horror as Evan begins a terrifying transformation from stalker to psychopath, determined to prove paternity of the child and claim Jess for his own. In the vein of Fatal Attraction and Cape Fear, Coffin Rock is a story of infidelity, leading to harassment, terror and murder. 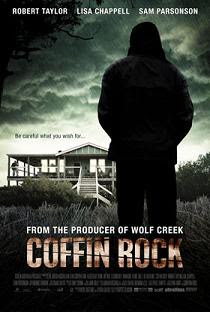 :
Australia's ominous terrain has been emphasized in many of film. The outback is known as an unforgiving place. In Coffin Rock, we open with a wintery sea and gray skies that are as bleak as Jess and Rob's efforts to conceive a baby. Shortly, they're targeted by Evan, the loony receptionist of their IVF clinic, who follows them home to indulge his sudden obsession with Jess.

While the audience is let in from the very get-go that Evan is bat-guano crazy without any pretense of subtlety, Jess isn't so lucky, and quickly winds up targeted and taken advantage of by him. While she's worried about the slip up and damage done to her marriage, what she should be worried about is Evan's quickly escalating, crazy obsession with her. Emphasis is on the crazy. Evan is such an overblown character and you expect him to bellow the line from Fatal Attraction about not wanting to be ignored. The crazy is so overdone it affects the rest of the film. While Jess is trying to figure out how to deal her pregnancy, Evan is watching television in the rain and lurking outside her home.

This is more in the vein of a richly photographed and well-acted Lifetime TV thriller. The same plug-and-chug TV movie structure with a sophisticated structure and accomplished sheen. This material should be pulpy and overblown, but the actors are good enough that even Evan's lunacy only rarely enters into camp territory. They're about all that keeps this story rooted as every shot and music stinger seems designed to maximize creepiness. In the end it's too lush, too fever-pitched, and a dressed-up a collection of tired thriller cliches.

SPECIAL FEATURES:
I have been unable to find a list of features for this title ANYWHERE.

CONCLUSION:
Too, too much. Coffin Rock is every "so-and-so from hell" cliche in a very handsome package. The Temp, The Ex, Fatal Attraction, and The Hand That Rocks The Cradle with Aussie accents and excellent production values. Well-acted and handsomely shot, but in the end unable to escape it's generic trash storyline. If that had felt more original I'd give this film an A, but when a story of crazy obsession has been done this many times without anything too new, it's getting a: