One A Week Reviews #11: Colour From The Dark

This edition of my "One A Week Reviews" is an Italian low-budget stunner I have to recommend as a gem that needs to be seen.

I've never read much H.P. Lovecraft, but do have vague memories of chipping my way through "The Colour Out of Space" back in my teens. I don't think it's required viewing to enjoy the surprisingly good Colour From The Dark. 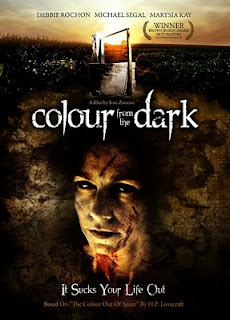 Set on an Italian farm in 1943, the action opens with the childlike Alice (pronounced "Al-ee-che") dealing with night terrors and losing her (rather-creepy) doll down the well in a dream. This is more an omen for the next day's events. Dropping the doll down the well, she gets her brother-in-law Pietro to scoop it out with his pitchfork. When he breaks... well, something and releases  CGI gas-and-light, the terror begins and the next week is pure madness. Alice's older sister Lucia is out that night burying a cross in the wheat field and keeps flashing weirdly black eyes. These farmers continue to till the soil while fearing the encroachment of World War II on their farmlands. The threat of the war hangs over the whole film in a way, while German bombers fly overhead. They have more to fear from whatever has loosed itself into their well-water.

Sure, Alice speaks for the first time by the third day, but the bitter, giant veggies the poisoned water is producing is affecting everyone in far more insidious ways. Lucia descends into sexual madness and this whole tense, tortured family soon escalate into violent madness. Are these Italian Catholic peasants being influenced by the devil? One would certainly think so judging from their increasing aversion to their crucifixes. Perhaps the ghastly lights are from something "from beyond"?

The always-amazing Debbie Rochon stars as Lucia. Why she hasn't yet headlined a big-budget Hollywood film escapes me, because she has both the looks and the chops. The lesser-known Michael Segal plays Pietro and he's damned easy on the eyes. "Can he act?" Who cares, look at the man!

I've never seen a film by Italian director Ivan Zuccon, but I plan to watch whatever I can find. The pacing and look of the film stuns for a shot-on-video, CGI effects, low-budget production. The effects are subtle here. Lights flashing in water, the occaisonal spray of blood. Clouds in the sky (which are always moving) and enriched colors. More directors should be using these light touches instead of big, unconvincing monsters and the like. Certainly gives a better effect. This is an ambitious director with an assured point-of-view and a vaguely novelistic sensibility. Even the slow patches in the film have purpose and menace and the subplots give more character than padding. The pastoral farm-imagery may be played a little over-the-top, and the Catholic imagery certainly is. It all works, though, and contributes to an overall threatening atmosphere. It makes sense that provincial Italians, who'd most likely be Catholic, would respond to any encroachment of madness by calling in a priest and lashing out at Catholic iconography.

Colour From The Dark comes highly recommended by me. Downright eerie and memorable, I can picture spending thirty times the budget and all you'd have to show for it is better film-stock. A meditative and well-paced horror film that actually made me jump a couple times... and I rarely jump at movies.
Posted by Jay at 9:01 PM

Email ThisBlogThis!Share to TwitterShare to FacebookShare to Pinterest
Labels: Colour From The Dark, Debbie Rochon, H.P. Lovecraft, Ivan Zuccon, Jay's Prime Cuts, Michael Segal, One A Week Reviews, The Colour Out of Space