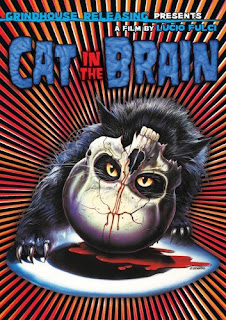 
As part of the through-story Fulci turns to a Psychiatrist to help him manage his scary movie delusions, but makes the mistake of picking one with problems of his own. You'd think his breakdown might just be burnout, since he's seemingly busy making two different films at the same time within the structure of this story. Mostly though, he walks around and zones out. Seemingly his every action has to evoke another running-time-padding moment of admittedly disgusting gross-out footage. Blood sprays, a few maggots squirm, people lose heads (and limbs) so often they seem less victims of crime than just, yes, absent minded. Fulci always liked showing eye-damage, and it's here in abundanceas well. He knocks off men, women, and children with abandon.

You'd also wonder if Fulci himself didn't seek out a shrink after this. Anyone who'd position themselves in their own film as a director whipping up a frenzy of a Nazi orgy that ends with a pool ball in the girl-pocket. Either he was a depressed masochist who wanted the world to see him in a truly bad light, or as someone shameless in his lack of self-awareness. Perhaps it's unintentional, but no one would walk away from Cat in the Brain thinking Fulci was proud of himself or much of his work. The production of this film probably consisted of two days of Fulci running around town setting up a camera he could stare into as the "observer," then a lot of time in the editing bay cobbling it all together. They barely bother to match new footage to old.

This is a really lousy movie. Lucio Fulci made some terrific horror films with nightmare logic. Zombie, The Beyond, The House by the Cemetery, and The City of the Living Dead are classics for their over-the-top gore set-pieces. The New York Ripper went over over-the-top as one of the most nihilistic grindhouse films ever made. Manhattan Baby and The Black Cat fail as being rather boring while later works like Demonia and Sodoma's Ghost aren't even watchable. He made a couple Giallos earlier in his career, the best of which to my mind is Don't Torture a Duckling, but wound up finishing out with some terrible TV movies. His movies were usually more memorable than good.

I'd love to recommend Cat in the Brain as the 8 1/2 of horror. Instead, it's a gory night-club cilp show slowed down by narrative. The one thing I can unreservedly recommend this film for is playing in the background at parties. Lucio Fulci has always been respected more a few nonsensical splatterfests paced as nightmares. The Fulci fan should attend to Cat in the Brain more as a slapdash, cobbled-together personal curio from the hit-or-miss master of grue than anything as original as his early horror achievements.
Posted by Jay at 8:37 PM