One A Week Reviews #5: Bad Biology 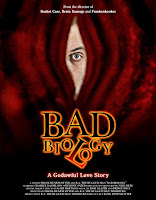 I had a conversation tonight where my neighbor told me he selected a movie to watch on Netflix because I'd given it a rating of four stars out of five. He kinda wanted to know why I'd liked it... I had to explain that Andy Warhol's Flesh was more a historical curio with nudity than a quality flick. I let him know that in the future if he wonders why I like something he should probably ask.

I don't think I'll recommend this one to him.

So, um, Frank Henenlotter made a movie about a woman with a monstrous, voracious vagina who meets a man with a rampaging, detachable penis. That's right, the maker of the Basket Case, Frankenhooker, and Brain Damage made a mashup of Teeth, Pervert, and One-Eyed Monster.

I think that really says it all. I'd missed Bad Biology when it was screened at the Horror Hound Weekend in November and regretted it. Tonight I finally got my hands on it. Near-guerrilla production values, an obviously low budget, wooden acting, and a general sense of good, sleazy fun permeates the proceedings. The "fun" is as lighthearted as you can make it when your lead character keeps killing her lovers when she gets carried away then goes and gives births to super-accelerated monster babies... but then again, her opening lines are where she discusses being born with at least seven clitorises.

Henenlotter's style is still made up of weirdly flat photography and practical special effects that are more about conveying their vulgar inspiration than pleasing the eye. It actually helps sell his films. All three Basket Case films have the same "charm." It's hard to sell a show that's a "vagina's eye view" otherwise. He's the King of Grindhouse cinema and still retains the crown. If the film stock was grainier and the costumes dated, almost all of this film could have been made in the early 80's. Well,, there wouldn't have been rappers posing with the Vagina-Masked models, but beyond that, this film is obviously from the father of Frankenhooker. This is pure party-cinema in the sleaze tradition with lots of naked girls and filthily gross-out humor.

So these two star-crossed lovers kill some people, meet B-Movie Scream Queen Tina Krause, and eventually come to a completely logical conclusion. If you like trash cinema, or have arguments with your own genitals, you're bound to enjoy the film in the spirit of "fun" it's intended. If you don't, you can happily pass.
Posted by Jay at 9:42 PM