One A Week Reviews #4: Horrible Bosses 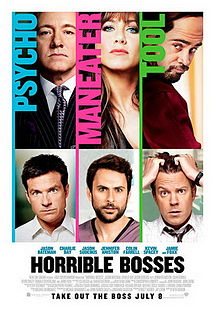 The crude comedy Horrible Bosses succeeds on two levels. On one, it's a showpiece for likeable film actors with comedy chops to shine. But on another level, it succeeds as a wish-fulfillment outlet for so many people who're laid off, fired, or feeling trapped in their jobs by this crappy market and horrible economy. As a kind of wish-fulfillment, this triumvirate take on "Strangers on a Train" satisfies. Jason Bateman, Charlie Day, and Jason Sudekis play office drones manipulated by bosses who have them by their proverbial short hairs. Feeling out of options, they eventually strike a plan to knock off each others' bosses in a round-robin of "have mercy" killing.

Bateman's Nick works for Spacey, a paranoid, selfish, power mad manager who delights in reminding everyone whose in charge. Kurt (Sudekis) loses his great boss to a heart attack, winding up under the thumb of Farrell as the useless, coke-head heir apparent. Dale (Day) is stuck suffering the (equal parts objectionable and far fetched) harassment at the hands of the sexually aggressive Dr. Julia (Aniston). They're all miserable, pretty much trapped, and decide that their situations are no longer tenable. Botched murder-planning and a running gag about being on the sex offender list are part of this bad-taste comedy's aspirations to be black comedy gold. It's more a silver, but a good time as complications ensue. Things wrap a bit pat.

The likeable cast all get to let their hair down to play down and dirty, wallowing in  their unlikeable characters. Spacey excels at this imperious sort of jerk and Day is pretty much playing his It's Always Sunny in Philadelphia character, but it works here. Foxx and Farrell come off a little flat in comparison, mostly because their characters are a little too exaggerated. Donald Sutherland, Bob Newhart, Ron White, P.J Byrne, Ioan Gruffudd, and Julie Bowen all show up to play in bit parts as well. Sutherland plays it straight, but everyone else shines in their little scenes.

In the end, it's Jennifer Aniston who steals this show. She's nearly a revelation, gamely comic with a hard edge and relishing her filthy dialogue. You get the impression she's been blunting her prickles as part of her responsibilities as "America's Sweetheart." She needs to demand dirty talk in her bubble bath more often, because she takes off with this whole movie when she does. Nails it.

This isn't a misfire. It hits the mark for fans of Charlie Day and Jennifer Aniston - and it's definitely satisfying anyone feeling stuck in their job.
Posted by Jay at 8:10 PM