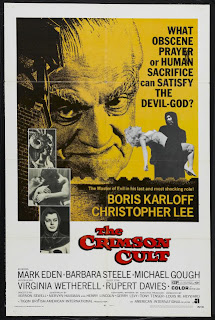 The Curse of the Crimson Altar, known as The Crimson Cult in the US, is an old-school Sixties horror flick that must've felt racy at the time (Nudity! Psychedelia!) and remains charming today.

"...and drugs of this group can produce the most complex hallucinations, and under their influence it is possible by hypnosis to induce the subject to perform actions he would not normally commit. (Extract from a Medical Journal)"


Any movie that opens with that quote then fades to a green-painted Barbara Steele in a golden ram's headdress presiding over a topless woman in black leather pasties whipping another woman as part of a ritual to get a man to sign his soul away... you know is a treat.

When Robert Manning (Mark Eden) realizes his brother Peter, the man in the ceremony, has been missing for ten days, he heads off to find him. Craxton Lodge in Graymarsh, however, is the center of a Witches night celebration, which involves men in sportscars trying to run down women in body stockings. It also requires young adults holding the kind of seemingly-racy-but-actually-rather-innocent orgiastic party people only have in movies... unless I'm running with entirely the wrong crowd. The party's host, Mr. Morley, is a delightfully dry and withdrawn Christopher Lee. He, along with vixen niece Eve (Virginia Wetherell) and creepy butler Michael Gough, quickly seduce Robert into staying at their large manor home.

(Delicious camp and a green chick ripe for Captain Kirk's plucking... after the break!) 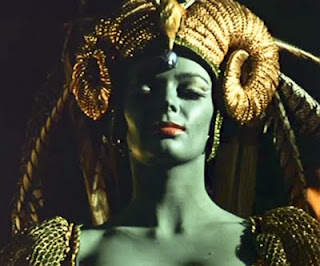 The witch in question is Lavinia (Steele), who Professor Marsh -an elderly but still charming Boris Karloff - appears to fill us in about. His story of long-ago witch burning and British manners pretty much sums up what's so lovely about this film. Sixties AIP and Hammer-style horror of a high caliber. Lavinia has, of course, cursed the family of those who burned her and their descendents supposedly all die from it. Guess who's family took a leading role in the burning way back when? Robert's, naturally.

Manning means well, but is also a womanizing ass and thick as a plank, but tries his best to figure out the mystery of his brother's disappearance and romance Eve, but more importantly, figure out if there's a basis in fact for his nightmares of Lavinia and feeling that someone's stalking him. Are his suspicions true? Could the blue-green bitch of a witch and nearly naked bohunk henchman be real? Considering most of the clues are so obvious not even the Scooby gang would miss them, what do you think...?

The measured, yet occasionally campy Karloff is a delight here (he admits to collecting "instruments of torture" with a twinkle in his eye) , as are the dated effects and eye-searing costumes. Between Steele's glided ram's head get-up, her leather-bikini-clad henchman, the pasties and snood-wearing whipper, and the Sixties birds in lacy body stockings, it's clear someone with a bit of a fetish worked on costuming this flick. Things do get plodding and, for an under 90 minute movie, this could use either tightening- or spicing-up, but it's still very watchable. A weird, perverse mix of manners and outrageous perversity, it's a shame this is an obscure film nowadays. The Curse of the Crimson Altar is worth a watch. I especially recommend it on a rainy night.
Posted by Jay at 10:00 AM