One A Week Reviews #33: Bereavement

Call it "The best looking POS I've ever seen" or "Terrence Malick's The Texas Chainsaw Massacre," Bereavement was an ill-starred review for DVDsnapshot. Blocked by a buggy computer, a buggy blu-ray disc, a death in the family, and other technical difficulties, I hope the review was judged to be worth the weight. 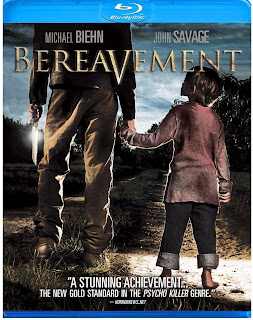 Official Synopsis:
In 1989, a 6-year-old boy is lured into the vehicle of a stranger. The stranger is a serial killer with a tendency for butchering teenage girls. In the basement of a rural Pennsylvania slaughterhouse, he will teach the boy everything he knows. Five years later, teen Allison (Alexandra Daddario of Hall Pass and Percy Jackson & The Olympians: The Lightning Thief) comes to live with her uncle (Michael Biehn of The Terminator) following her parents' death. In time she will discover the boy and his madman mentor and they will all be plunged into an unimaginable evil from which there may be no escape. Nolan Gerard Funk (Deadgirl), Brett Rickaby (The Crazies), Valentina de Angelis (“Gossip Girl”) and John Savage (The Deer Hunter) co-star in this graphic and acclaimed shocker from writer/director Stevan Mena about family, torment, and the nightmare absolution that is Bereavement.

Our Take:
There's an advantage in watching a “prequel” when you haven't seen the movie that inspired it. There may be things staged that retroactively pay off in that film that you miss, but you get to judge it on it's own strengths. However, what do you say about a film that's the story of a six year old being molded into a serial killer?

Well, for starters, Bereavement is coldly gorgeous. Beautifully filmed, with shots chillingly composed, it oozes ominousness from beginning to end. That beginning follows a character following children around in a truck, and eventually snatching one to keep for his own and raise to be a killer. He picks Martin, who can't feel pain, and quickly stops empathizing with others.

Talk about training up a child...

Meanwhile, Allison is moving to the country to live with relatives after a family tragedy. She's still cursed as their paths are destined to cross, in this grisly, good-looking film. I sometimes wonder: why the hour of family tragedy backstory is bothered with when the point is to get her shrieking and shuddering?

The big problem here is the same one as in The Texas Chainsaw Massacre: The Beginning. If you're putting the story of a serial killer in front of another story of that same killer, doesn't there obviously have to be a certain amount of “getting away with it” implied from the get go? The last half hour, especially, is some potent, sad, and rough stuff. Bereavement is a fitting name here.

The acting here isn't thin so much as the roles are. Michael Biehn and John Savage headline in what are essentially (effective) supporting roles. Relative newcomer Alexandra Daddario does quite well within her “final girl” role's constraints. Brett Rickaby's killer, Grant Sutter, however, has great presence when silent. Sadly, he's saddled with some cliched “evil” dialogue that fell flat. He sounded equal parts “chilling” and “my accountant.”You walk away remembering Spencer List's Martin, if for no other reason than a child actor smeared with stage blood tends to stick in one's mind.

The photography is excellent but the story, again, is dark, violent, and hopeless from the very beginning. Writer/Director Stevan Mena is a major new talent to watch, but the mastery's hard to see for all the butchery.

Audio & Video:
The audio is presented in Dolby TrueHD 5.1 and handsomely presents a soundtrack that clearly had a lot of attention paid to it. The idling truck engine in one scene is the most real I've ever heard in a film.

The film itself, however, looks terrific. Director Stevan Mena and cinematographer Marco Cappetta do fine work, with fantastic widescreen compositions and crisp, deep shadows. This film was creatively lit, and the depth captured by the image proves that you can replicate a near 3D experience with good photography. Using 35MM film instead of digital video is a real treat nowadays, and Bereavement is as easy on the eyes as it's content is hard to take.

Blu-Ray, however, is cruel to behind-the-scenes video. Digital or not, it's absolutely unforgiving.

Special Feature:
There's enough here to make for a well rounded presentation. Included are a nearly 35 minute “making-of” and a 7 minute “First Look: On the Set” featurette, though they really don't dig as deeply into the background and making as one might like. There are 10 minutes of deleted scenes, including commentary, a TV Spot, the Theatrical trailer for this and other films, and a montage of behind-the-scenes photographs.

Conclusion:
Bereavement is one of the most handsome films I've seen in ages, yet the content runs towards rural nihilism, since every story beat seems to involve another trussed up, nubile girl shrieking in pain. If looking for any hope or redemption, keep looking. The moral to this prequel, though, is: “A bad guy who starts out a victim, but still chooses to be a bad guy, is... and this is a shocker, I know... a bad guy.”

Overall Picture:
Movie: B-
Video: A
Audio: A
Special Features: A-