One A Week Reviews #32: Norwegian Ninja

A fun flick reviewed for DVD Snapshot. Weirdly spoofy and retro, like a kind of Nordic Black Dynamite. 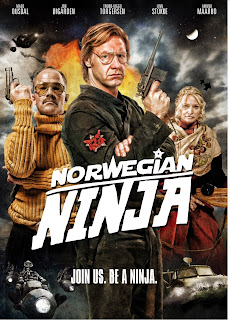 
A fictionalized account of the most notorious political scandal in Norwegian history, Norwegian Ninja is a deliciously tongue-in-cheek spoof of the Cold War spy movie, with added ninja action. Because, as everyone knows, every story can be made better with ninjas. Blending historical events with his own less-than-historical elements, writer-director Thomas Cappelen Mailing creates the Rushmore of ninja films, a film that wryly questions just how truthful the truth really is. And then sends a ninja to punch the truth in the face.


According to Wikipedia, Arne Treholt was a Norwegian politician and diplomat convicted of treason as a Soviet and Iraqi in “the most serious spy case in the modern history of Norway.” However, the revisionist satire Norwegian Ninja chooses to add another dimension – that he was also a member of the Ninja Force of the King of Norway.

Reclaimed as leader of a crack squad of “Ninjas” who seem more like a Nordic “A-Team,”I suppose this is a bit like an American recasting Alger Hiss as James Bond? If the film's political and satirical dimensions escape you (as they did with this viewer), one can still enjoy the sense of humor, witty eye of eighties detail, and some surprisingly effective CGI as these “GI Svens”of the “Ninjatroppen” defend the Norwegian way of life. The look, however, is frequently more seventies than eighties, but the verve of this film gives it a delightful uniqueness. One set-piece especially, involving an oil-rig, is so creative that any limitations of the computer effects are quickly forgiven.


They take on a secret, CIA-funded army called “Stay Behind” who strategically use terrorism to put a country's voters to choose “the right party” and put them off Communism. Will Treholt and his protege, Bumblebee, be able to complete operation Saga Night and save (the somewhat dotty and amusing) King and Country?

With well-integrated historical news footage, a strong aesthetic, and amusing special effects, including some great miniatures (and a truly witty moment involving a flip-book manual), Norwegian Ninja is endearing and a bit of a lark, but I can't shake that there's not some dimension of satire completely lost on me. If you can't figure out what the filmmaker is trying to accomplish politically, at least you can enjoy the fun ninja spy action.

Norwegian Ninja is presented in 2.35:1 Widescreen and in Norwegian Dolby digital 5.1 surround and 2.0 stereo audio with English subtitles. Extras include a set 3 deleted scenes, 6 bonus scenes including bloopers, a set of six documentary featurettes, a music video, 2 TV spots, 4 teaser trailers and the trailer for this film and others.


A humorous, spoofy piece of historical revisionism, Norwegian Ninja is a spoofy lark worth catching, but might carry more weight if you're familiar with the political history of Norway in the Eighties.