One A Week Reviews #31: Breath

A beautiful Korean surprise reviewed for DVDsnapshot.com - and highly recommended. 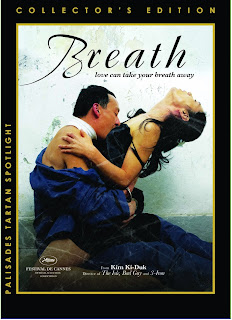 A prisoner on death row and a woman who's drawn to his plight go through their own spring, summer, fall and winter of love in Breath, a typically quirky chamber drama by helmer Kim Ki-duk.


Nominated for the Golden Palm at Cannes, this emotional tour-de-force from the world-renowned Korean auteur will sweep you away with restrained passions painted in seasonal colours. Asian star Chen Chang (Red Cliff; Crouching Tiger, Hidden Dragon) leads an excellent cast that includes a Jung-Woo (The Chaser) and Park Ji-a (The Coast Guard).


It's easy to understand why Breath was nominated for the Palm d'Or at Cannes. Scenes in films are composed to direct the eye where the filmmaker wishes the viewer to look. Kim Ki-duk seems to thrive in oblique composition and scenes that almost engage in misdirection. The subject is frequently happening right outside the frame, off-center, or even the blurry foreground. With a spareness of both visuals and dialogue, this plain quiet movie adds up to be surprisingly rich.


Yeon is a frustrated wife and sculptor who's just discovered her husband is having an affair, and decides on a whim to visit Jang-jin. He's a death row inmate who'd tried to kill himself to avoid his pending execution. Breath is the kind of film that can make a character's affair perfectly clear from the beginning even if not actually confirmed until the half-way point (and that is not a spoiler).

Jang-jin comes with three very individual and silent cellmates, so stranger who keeps visiting him with obtuse stories, seasonal decorations and song, does seem to put him a little out of his wheelhouse. (That “spring” scene is the make or break point. If you find it twee, turn the DVD off. If you can stand it, the film's worth staying with.) Seemingly a little mad, she comes alive and forces seasons and color into his cement world during their meetings.


The color palate only warms up when she creates her little world for him, and this touch is part of the beautiful look of this film, otherwise a chilly blend of snow and cement walls. Ji-a Park, as Yeon, is either refreshingly subtle or a bit melodramatic, while Chen Chang's Jang-jin is all confusion, fear, and impulsive love. It's the silences they're allowed to act that make this film so effective, not the moments of dialogue. Yeon and her husband do converse, if strained, while the inmates barely speak. They're all expressive action. One character, the warden, is a presence only experienced as a reflection in his monitor, which we get to view as he facilitates their growing relationship.


This is an icy, composed film of browns and grays that confines vibrancy to the relationship between the central characters. As a visual representation of intimate relationships, that's a lovely artistic choice. Breath is a heartbreaker and worth your time... providing you can keep your imagination from substituting in Hannibal Lecter and Clarice Starling during the quietest parts. I'll be seeking out more work by Kim Ki-duk.

Breath is presented in 1.85:1 Widescreen with Korean 5.1 Dolby Digital and 2.0 stereo audio and English Subtitles. The DVD includes a making-of and two Cannes-based featurettes, Interviews with the filmmakers and trailers.

Baroque and nearly as composed as a Peter Greenaway film, Breath also has a surprisingly generous heart. A film about the relationships between a lost housewife, her husband, and a man facing death, it's all warm moments snatched from a very cold and unforgiving world. This one is quietly beautiful and sneaks up on you.