"24" meets "Twister" in this "disaster (of a) movie" I reviewed for dvdsnapshot.com. Enjoy!

OFFICIAL SYNOPSIS
With eye-popping special effects and amazing action, this apocalyptic thriller will leave you breathless! Techno-billionaire Robert Terrell (Treat Williams, "Everwood") has a sinister plan: rule the world by controlling the weather. But when a test goes wrong and stirs up a global cataclysm, it's up to a dedicated scientist and a renegade reporter to halt the Megastorm's deadly rampage. also starring James Van Der Beek ("Dawson's Creek"), Teri Polo (Meet the Parents), and Luke Perry ("Beverly Hills, 90210"), The Storm shows what happens when nature turns against mankind - with devastating results. 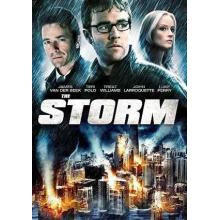 Sir Robert Halmi is the new Irwin Allen. As the current reigning kind of the disaster movie, he and his son grind out miniseries and TV movies of killer infections, natural disasters, and fantasy adventures madeup of equal parts formula and pure entertainment. There's always life-or-death stakes played out by characters trapped in comparatively middling domestic dramas. What worked so well as the formula of disaster classics like The Towering Inferno, The Poseidon Adventure, and Earthquake works just as well here in The Storm. This time, the Halmis at it again with a TV miniseries featuring Lex Luthor-worthy plot to conquer the world thru weather control.

What didn't work as the MacGuffin for the film version of The Avengers winds up getting a bit out of hand in The Storm (also known as "Megastorm"). Perhaps Emma Peel could've helped. The plot immediately kicks into motion as things start falling apart in the first ten minutes. Five more and we establish that the James Van Der Beek and Teri Polo characters used to date, because you can't have cataclysm without renewed romance in a disaster flick. If you don't think the EMT with the pregnant wife are going to have storylines that build as the storm clouds do, you've never paid much attention to this sort of flick before. (There's an unexpected plot-twist about 35 minutes in that breaks the formula of this sort of entertainment. It's violent, alienating, and surprisingly jarring. The Storm slathers on action and bloodshed to pad it's running time, setting it apart from disaster flicks of yore.)

There's several subplots and a slow build since you have to have cliff-hangers at the 80 minute mark that ends part one. Will an evil billionaire with the government in his back pocket be any match for a desk-jockey number-crunching scientist? Isn't Luke Perry's hair a bit long for someone in Military Intelligence? Will our subplots all be resolved by the end of the inclement weather? You know the answers, but taking the ride is where the fun is...

SPECIAL FEATURES
Trailers for Meteor, Knights of Bloodsteel (both featuring Christopher Lloyd), and The Last Templar. Presented in Widescreen and in English Dolby Digital 4.1, the disc has no other features.

CONCLUSION
Comforting like an old shoe, and nearly just as... aromatic, The Storm is another Soap Opera/SciFi hybrid where special effects run rampant and actors cash paychecks in a nearly 3 hour cheese fest. Okay for a rainy day if you're a disaster movie and action flick lover. Otherwise, the mean-spiritedness and off-handed thrown-in body count make this is something you can take a pass on...