One A Week Reviews #1: Deadline

In my ever expanding effort to get myself motivated to post more on here (So I took December pretty much "off," who didn't?) and recognizing that I seem to mostly put up movie notes at this point , I'm going to try and review one flick a week. I watch a lot of stuff, and am actually going to be watching less over the course of this year as I get other things in my life rollin' (more on this later). So now. when I do watch movies I normally wouldn't mention on here, I'm going to try and be a little more discerning and pay a little more attention and review 'em.

This "One A Week Review" theme is going to be runnning on top of posting the reviews that I write for dvdsnapshot.com and any other posts I write. I also plan to do "The Yucky Movies of October" again in 2010, though I'll plan a little further ahead for htat one.

This weekend we'll actually have two since last Saturday was number one of fifty-two in the year. This insures that it's also something I can have wrapped up before New Years. The best laid plans, and all, occasionally go awry, right?

...and remember, thar be spoilers here...

Would I even have watched Deadline if not for the untimely death of Brittany Murphy? Maybe. There's several of her films parked in my Netflix queue as I always liked her presence in films going all the way back to Tai in Clueless and her super-showy role in Don't Say A Word but they also tend to get pushed back further down the list. This one has generally been no exception, though it's recent publicity over it's cover art probably made it a little more attractive to watch. 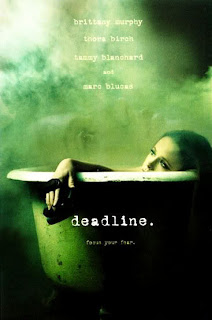 (Seriously, check that image out, wouldn't you scramble to pull that while also getting the entire world to see it by announcing you're going to pull it?)

In this film she's Alice, a screenwriter (write what you know people) who, though struggling, has a damn nice New York apartment. She takes off to the isolated (aren't they always?) country house of a friend to "complete her work," by which she means take lots of baths, listen to the house creek, and avoid an abusive husband (or boyfriend, I'm not quite clear on it) who, of course, escapes from prison while she's there.

She videotapes obsessively and also finds a set of videotapes in the attic. Her tapes reveal her secret relationship with her friend Rebecca (Tammy Blanchard, who plays lesbian pining so heavy-handedly in the beginning you're glad to see her go), while the others feature the previous inhabitants of the house, Lucy and David Woods (played by Thora Birch and Marc Blucas). Strange events start happening - animated text on her laptop, overflowing bathtubs, all making her wonder if the house is haunted. She could also just be over-reacting, as medications are mentioned, and Murphy's performance is pretty much "depressed, anxious sonambulance." Stringy hair and bloated lips (which highlight that her facial features are asymmetrical to the point of making her look like a stroke victim in her first close-up) are hard to get past, and I really wish this was a role that required energy out of her. There's lots of actresses who can play "still" and "wan," but she really could do more.

My biggest problem with any film featuring a possible haunting is that any scene featuring a mirror or just a deep-focus view of a room has me expecting a jump-scare to come at any time. This sort of heightened anxiety/expectation in the viewer means one quickly detaches and says "Screw this." Deadline even has the "ghost appearing in the medicine cabinet mirror" shot, which is so de rigeur for this sorta film that I now hold it against horror films when I see it.

The Birch and Blucas story starts out with simple domesticity, then quickly implies she's off having affairs... though by 40 minutes in, at their third sequence, I started to wonder if "instead of watching their videotapes, is she hallucinating her screenplay? Or playing out the relationship with her boyfriend through these two in her mind?"

Alice keeps watching the videotapes, watching their relationship crumble as Blucas' character gets more and more obsessed with whether or not Birch's is cheating. I always like Birch (last seen around these Big Lug Lands in Train), and this film is no exception. There's a surprisingly graceful scene of Lucy and Alice talking to one another at the bedroom mirror that almost made up for the "Lucy as a jumpy ghost" scene before. Sadly, right after it is a call from her girlfriend pointing out that the storyline we've been putting together for David and Lucy seem to be the same events that happened between Alice and her boyfriend/husband. (Again I never got a clear idea of if she was married to him or not.)

So, there's haunty events, there's Alice's fragility, there's David putting together enough clues to figure out he has a reason to be paranoid and making Lucy a ghost. (My biggest jump-scare? When Birch has a quick-blink during a close up shot of her playing Lucy's open-eyed corpse. That startled me.) David then makes himself one, which has you wondering "well, then how is it they disappeared without a trace (mentioned during Rebecca's call in the last paragraph) yet his body was swinging from the rafters? Wouldn't a realtor notice it before Alice's friend bought the joint?"

That's a question answered at the last 12 minutes of the movie when David shows up looking for Lucy...

(I spoil the ending below, proceed at your own risk)

The end gets a bit confusing and Rebecca shows up at the end as the character who clarifies things for the audience. Being that our A and B plot threads were pretty much the same storyline, they come together confusingly.

David returns and attacks Alice, calling her Lucy. Lucy's ghost shows up to scare him into falling to his death and rescuing Alice from drowning. Rebecca shows up at the house and finds her in a dry-tub in very bad shape. Alice's barely-audible muttering of her conclusion doesn't help matters as I really didn't catch what all she said, except it was something about David faking his disappearance and returing to the house.

We're left with Rebecca putting the pieces together and finding Alice's screenplay. In the beginning she has a line imploring Alice to "write her own life," and she essentially did just that. Her screen play IS the David and Lucy story. Rebecca goes downstairs (passing the spot where David's body clearly isn't) and picks up the camcorder that's been so omnipresent through the whole flick. One videotape David took of Lucy sleeping Alice actually shot of Rebecca. So our supernatural ghost story is really the psychodrama of an emotionally fragile battered wife who's a repressed bisexual? These people are unbelievable and kinda annoying.

I like Brittany Murphy. I like Thora Birch. I did not particularly like Deadline. It tries to be a ghost story solely so it can pull a slight-of-hand "oooh, we fooled you" moment. No thanks.