Wrapping up a wonderful year reviewing for DVDsnapshot.com with a a fun little indie comedy worth checking out...

OFFICIAL SYNOPSIS
An exhilarating and humorous study of youthful anomie, Skills Like This revolves around a group of close-knit friends whose shiftless lives go topsy-turvy when wild-haired Max (Spencer Berger) drops his failed writing career and takes up something he believes he's really good at: stealing. His first bank heist plunges him into an unlikely but thrilling romance with sexy bank teller Lucy (Kerry Knuppe), who, after handing over a bag stuffed with cash, finds herself torn between Max and the law. 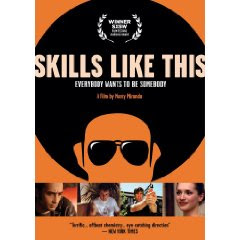 Faced with their friend's new career path, the doltish but impossibly upbeat Tommy (Brian D. Phelan) is primed for adventure, while straitlaced Dave (Gabriel Tigerman), ever the adult, worries about the consequences. As Max steps up his crime spree, the friends have to make hard- if not hilariously awkward- choices about the direction of their lives.

Artfully directed by Monty Miranda, Skills Like This shows "considerable intelligence and chemistry" (Variety) and bristles with rock'n'roll energy - underscored by the sounds of Denver's music scene. A comedy for anyone who's ever wanted to find something they're really good at, Skills Like This is as smart as it is funny.

OUR TAKE
Ever do something impulsive after a really bad day? I myself bit a neighbor's head off after a particular lousy morning. Max decided to rob a bank after his play's disastrous premier and dropping his wallet in the toilet. Well, we all have bad days...

Skills Like This is charming, a fast-moving and never overly-quirky Indie comedy about three aimless pals who find some purpose and renewed excitement in life when they decide on a whim to become bank robbers. Spencer Berger both wrote the film and plays Max, and does a good job of selling the idea that you can stumble into something you’re really good, never mind the repercussions, with humor. The romance with robbery victim Lucy doesn‘t feel forced, as Kerry Knuppe is charming (reminiscent of Jennifer Garner and Heather Graham) and you happily go along with her on the romantic ride in the film. Most “meet-cute” and “outsider” comedies work hard at what Skills Like This pulls off with ease.

Well-photographed (in HD video, except for bank robberies shot on film), fast-paced, and marvelously scored, Skills Like This is relateable to anyone who’s been through or are going through their awkward 20s. I found this film a pleasure, frequently flashing back on it’s early 90s outsider comedy forebears.

SPECIAL FEATURES
The disc features 13 minutes of Extended/Deleted Scenes, 16 minutes of Interviews, 2 Trailers for the film and a clip of the director Monty Miranda's SXSW Award Acceptance Speech. Other extras include the Tommy character's Resume (as a .pdf file) along with text information about the director, the film, and it's soundtrack. Skills Like This is presented in widescreen with Dolby Digital 2.0 audio and closed captioning available on the disc, though no subtitles.

CONCLUSION
Skills Like This is an utterly charming Indie-film-bank-robbery-romantic-comedy that feels pretty timeless to anyone who’s ever felt a little aimless. Unrated, but okay for teens and up, it’s a real pleasure infused with an energy reminiscent of the best of early 90s Independent film.