I'm not even sure why I chose to finally sit and watch the When A Stranger Calls remake. I mean, I hated the Prom Night PG-13 rehash, and this seemed more of the same. In the end, I was so apathetic I'm not even sure I'll copy-edit this post...

The original has one of the tightest first acts in the history of movies, and if you haven't seen seen the film, you REALLY should. The ringing phone, the mysterious "Have you checked the children?" It's great stuff. In this age of cell phones you'd figure it'd be riper for great horror than it is. 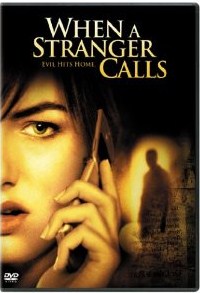 This time, Camilla Belle is Jill Johnson, babysitter. Since her parents are so shortsighted as to not have her on an unlimited calling plan, she's stuck grounded and sitting for a family with a fabulous lake house that's out in the middle of nowhere. Unfortunately, she was so wrapped up on the phone with her boyfriend problems and missing the school pep rally/bonfire thing that she didn't watch the prologue where it's implied some poor teenage gal is torn to literal bits by a Lance Henrickson-voiced mystery caller.

Now, I don't have kids. I also lack a huge, modern home with a bird and butterfly conservatory at it's heart and a live-in maid on the third floor. (The birds show up later in what might be the only really eloquent moment in this whole fiasco.) I would assume most people with a live-in maid could impose on her to watch the children on occasion, but what do I know? Thankfully, I also only babysat a handful of times in my life. But I do know that the suburban home had a familiarity that was a lot spookier than having this set in a mansion with a remote controlled fireplace. People who shell out for rooms that turn their lights on when you enter them also have phones with Caller ID for that matter.

I also know that the calls coming from inside the house made for seventeen scary minutes in the original, and for eighty flabby ones in this. Seriously, showing off the house-porn is great and all, but not the most ripping entertainment. Unless you watch a lot of house-hunting shows, I suppose.

Anyhow, we're 22 minutes in before the landline first rings (at this point in the first one were off on the awful act two digression with Colleen Dewhurst as a terrifically blowsy drunk). By this point you realize that even an 87 minute long movie, including credits, can drag madly. The sequence of Belle stalking what turns out to be the ice machine confirms it. Seriously, if you're going to always have us squinting into the dark background behind Belle waiting to see something back there, you have to eventually have something back there.

There's more characters here, too. Blond, self-described "bitch" Tiffany gets to have the world's most dramatic driveway experience and boyfriend Bobby calls from a bonfire that looks more like a cross burning.The calls don't really amp up until the halfway mark, either. By now, anyone experienced in these films realizes all you have here is the trappings of tension (shots, score, pacing) without any actual tension.

Things pick up a little for the last half hour or so. She's finally asked if she's checked the children and we start having some actual shadows moving and stalking going on. Lots of running around and ringing phones follow, but at this point it's hard to try and actually scare people after pretending -or is it aspiring - to for nearly an hour. Thank you, PG-13 rating. The kick off the third act with the "inside the house" bit and an actual body. Even this isn't that fearsome. I was kind of hoping it's all turn out to be some awful bit of sadism by the couple who hired her, but, like everything else in this, the truth is much more pedestrian... and much more boring.
The baddie moves slowly and measured. His ease is the one creep-tacular bit going on here.  He counters Belle's near-constant, oddly husky panting nicely.

The take away from both the original and the remake of When A Stranger Calls is this: Jill Johnson is the worst babysitter on the planet. (She also exhibits the awful judgement shown by most horror heroines. Not killing the sick fuck who's tried to kill them when she had the chance.) Just let her go to her damn bonfire, already. There's also a lot of other movies that could have been made with this gorgeous house set. This isn't the one you wanted to see.
Posted by Jay at 10:52 PM

Email ThisBlogThis!Share to TwitterShare to FacebookShare to Pinterest
Labels: Camilla Belle, Jay's Prime Cuts, One A Week Reviews, When A Stranger Calls