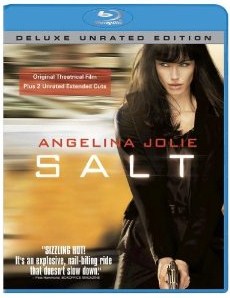 Specifically, the Unrated Director's Cut, one of three versions available on the Blu-Ray. First off, I don't have that much to share on it. I think that's partially because I tend to prefer talking up my beloved B-movie curios to Hollywood "Tent Pole" pictures. If I'm talking about a big crowd-pleaser, usually it'll be a disaster movie.

Salt is a very "deluxe" movie. Philip Noyce directing Angelina Jolie, Liev Schreiber, and Chiwetel Ejiofor in a BIG budget, big effects story of a CIA agent who has a whole country after her because just might be a Russian "sleeper agent." (How quaint. The "Cold War." Thankfully, in the hands of Noyce it still chills) The cinematography is luscious and the CGI seamless. About the only things flawed here are Jolie's wigs, much of the logic, and most (read: all) of the physics.

A Russian defector named Orlov shows up at the CIA with a story implying that Lee Harvey Oswald was a substituted, covert assassin and that agent Evelyn Salt is a spy named Chenkov (which should technically be Chenkova in Russian, right?) raised since birth to eventually kill. In this case, she'll be after the visiting President of Russia. The game from there, as she escapes and goes on the run, becomes "Is she or isn't she?" Is she breaking out to go find her missing husband, or to save her own hide?

Missing now is some of the unpredictable wildfire that makes Jolie so exciting, probably less due to age than the burdens of being "Angelina Jolie," but she's still ferociously and technically impeccable. (At least this came out before The Tourist, where she's so calcified under her maquillage you'd think they were fleeing Sodom, not Venice.)  Her "action hero" mode is getting familiar (Milla Jovovich keeps it fresher), but here "Lara Croft" is spiced up with some Macgyver and latter-day Bond. Her "weekend bag" turns out to hold a hilarious amount of weaponry and she never stops moving. Everything is arranged to keep the guessing going, which is good as her acting seems part craft, part "stalking about with purpose"... done for large swaths with Cheshire-like inscrutability. About the only thing clearly conveyed in this part is her character's love for her husband. Their scenes together are the only genuine, unguarded character moments in the film.

She's matched by the always-measured, always-muttering Liev Schreiber. Personally, I've always found him underrated and compelling, but he's an acquired taste for some. I think the opacity all the main characters exhibit comes more naturally to Schreiber than Jolie, but she seems to "wear it" more comfortably now. Is that an opinion about their acting, or about the baggage I project on the most famous woman in the world? Either way, they're great when they get moments to actually act, even when the movie escalates in ridiculousness.

Things get twisty at the halfway point, sparking another round of chases. There's a major plot point at the hour mark which gives what follows an... unfortunate flavor. From that point, things are so amoral it's hard to continue relating to the proceedings. Harder is continued empathy for the lead. You'll still flinch with the punches and enjoy your popcorn, but bold choices are made here than can cause you to sour irretrievably on the film. (I admit this happened to me.) One character makes a movingly generous choice in the beginning, and it's mirrored by one that - I suppose - is to set up the great, tragic failing of Evelyn Salt and convey the scope of her burdern, but it's still uneven.

Phillip Noyce's skill keeps things exciting, but they stop being fun. When the price of "saving the world" is this high, you wind up with an enjoyable thriller that's hard to enjoy.
Posted by Jay at 5:58 PM