One A Week Reviews #9: Devil 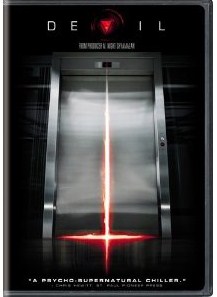 I got stuck in an elevator once. About 13 of us, only two of whom would probably qualify as "slender," all crammed in like sausages and totally exceeded the weight restriction for the machine. I used a cell phone to call the front desk and we were out in probably less than ten minutes, which is good as the agoraphobic started sweating it one minute in and by nine we were plotting who to eat.

Devil opens with a recovering alcoholic who's lost his family has a crisis of faith while investigating a suicide which leads him to a skyscraper (333 Locust Street, no less) where the story takes place. He's a stock character but that's okay as short-handed caricatures are kind of the point in Devil. The movie is a supernatural version of a "locked room mystery," tight, short, and sharp at eighty minutes.

We then turn to an establishing scene in the foyer that establishes time and place like tribute to Brian De Palma, where an obnoxious salesman (Vince), a pretty young lady (Sarah), an older woman (the only recognizable face, long time TV actress Jenny O'Hara), a security guard (Lawson), and a mechanic (Tony) are entering an elevator. (Those names hardly matter either.) The action takes us into the elevator where things quickly get tense and the outer building, where the maintenance and security crews deal with the rapidly declining, jump-scare-filled day. Before long, one of the trapped has a shard of jagged mirror in his neck and a security guard is saying it's "The Devil's Meeting." The body count stacks up, and tempers flare, but what's real and what's a trick of the Devil's? After all, one of them is the devil punishing everyone for their sins.

Devil is a speedy, spooky B-movie morality play "Whodunnit" with an And Then There Were None flair and PG-13 restraint. Recommended for an entertaining night at home.

PS: When asked to guess based on the trailer who the Devil was, I guessed correctly. It's the sensible choice.
Posted by Jay at 3:20 PM