One A Week Reviews #10: Ghost Story

Although thirty years old and featuring a cast of movie stars in their seventies and eighties, Ghost Story is worth revisiting. Based on the Peter Straub novel, it plays with all the richness of a well-told story; one given room to breathe.

The Chowder Society - made up of John Houseman, Fred Astaire, Douglas Fairbanks, Jr. and Melvyn Douglas - are in the winter of their lives in a wintry, upstate New York town. When one of the twin sons (both played by Craig Wasson) of Edward Wanderley (Fairbanks, Jr.) falls to his death after being scared by... something in his bed, he calls home his other son, Don. Next thing you know, Wanderley is falling to his death after a visitation of his own and Ricky Hawthorne (Astaire) is having run-ins with the fearsome Gregory Bate and his somewhat feral brother, Fenny. The Chowder Society must confess a secret to Don they've held for fifty years if they want to save any of their lives, one that has something to do with the spectre who keeps appearing in various states of rotten decay. 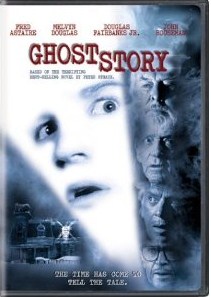 Don has his own memories of an aborted, passionate affair with Alma Mobley (the buttoned-downed Alice Krige) who may just have ties to Eva Galli, the woman who bound together the Chowder Society. Is the the ghost out for revenge, a reincarnation? While Don withdraws from Alma's spookiness, the Chowder boys had to take a far different approach to their Eva. They all followed her around like puppies and fell in love with her. Their foolish, childish bravado in youth- their stupidity- leads to Eva's doom and binds them for life (maybe they shouldn't have put the hats on the bed?).

The four old goats of the Chowder Society are movie stars through and through. They still bring all the poise and talent of their distinguished careers. The actors who play them in youth (Ken Olin is the best known, playing Houseman's character) acquit themselves, but none match the freight of experience their older counterparts bring. Patricia Neal appears as Astaire's wife. Does being 27 years younger than the 80 year old actor make her a vixen in a May-December romance? I like to think so. Wasson's star never really took off, but he's just as compelling here as in Body Double.

It's really Alice Krige's film in the end though. Even when not seen, her allure, simmering under her glacial poise, runs through - haunts- the film even before she actually appears in the wintery settings. Wasson and Krige are both in their mid-twenties when the film was made, but both seem much older. (They also indulge in copious levels of nudity that you just don't see much anymore in "A-pictures.") Krige, well-known to genre fans as everything from The Borg Queen to Lady Jessica Atreides (in the Children of Dune mini-series) earns her horror and fantasy bona fides here alone.

The jump scares and grotesque make-up effects still play effectively. (Seriously, there are some disgusting make-up effects in this movie.) The slow, sumptuous, storytelling gives the effects space and the story room to unfold. That said, the story keeps chugging along, even if it really is mostly constructed out of two extended flashbacks and nightmares. Beautiful, sometimes startling, well-crafted and acted, Ghost Story is a must see.
Posted by Jay at 8:53 AM